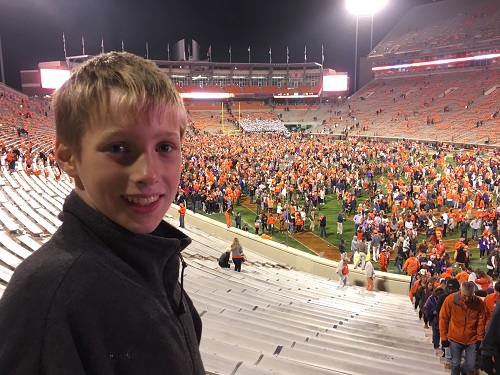 Every military kid I know has a first favorite football team and a second favorite team. Their first favorite is the team of their hometown, or where their parents are from. Their second favorite is the team of the state that their parent is currently stationed at. For me, that team is Clemson. Even before moving to Charleston, I rooted for Clemson, as long as they weren’t playing against LSU. But being in South Carolina during one of Clemson’s best seasons, I have caught a little Clemson fever. Don’t misunderstand me. I will never like them even one-trillionth of how much I like LSU.

I would not be writing this pre-national championship post with so much passion if Clemson were playing any ole team. However, with Clemson playing Alabama, LSU’s biggest rival, I am passionate about Clemson pulling off this win. As Zeke likes to say, our first favorite team is LSU and our second favorite team is whoever is playing Alabama. So, Geaux Tigers!
If there is one thing in the world that I’d like to see almost as much as LSU winning is Alabama losing, and I think my chance has come. I’ve seen Clemson’s offense play from the stands and it was fun to watch. My dad and I got the tickets from a man at our church who has had Clemson season tickets since the 1960s. When we went to the Clemson vs. South Carolina game, I made up my mind that if there is one team to beat Alabama it’s them. My suspicion was confirmed when they scored 31 points against Ohio State in the Fiesta Bowl. Ohio State supposedly had the 3rd best defense in the nation. Clemson’s defense never let Ohio State put a point on the board.

On Friday, all the fifth grade teachers called me over to their lunch table to tell them why I was predicting Clemson to win the national championship. I’ll write here the same thing I told them. It is a well-known fact that Alabama doesn’t handle tempo full spread offenses like Clemson very well. We all saw last year a similar Alabama defense get picked apart by Deshaun Watson when he went 30 out of 47 for 405 yards and got four touchdowns. The only tempo spread in the SEC is Ole Miss and not surprisingly they were the only team to score 43 points against Bama this year. If Ole Miss can put up 43 points, imagine what Clemson will do.

A smart and experienced quarterback like Deshaun Watson is extremely important against Alabama. Alabama has scored on 6 out of their 16 picks for touchdowns, and in a game like this that can mean the game. Alabama lives off their defense and LSU showed that they can be held to ten points easily if you have a good defense, which I think Clemson owns. For Alabama’s offense to do well, the offensive line needs to protect Jalen Hurts long enough for the play to break up and for him to take advantage. Jalen Hurts needs to get to the side line or Bo Scarbrough needs to get holes up the middle. I know for a fact Clemson has some beastly defensive ends that can contain Jalen Hurts, and a couple of defensive tackles that can plug up holes in the middle and get past the offensive line to get the quarterback. If I were Clemson, I wouldn’t worry about Jalen Hurts arm too much but I would recognize the wide receiver screens and make sure I put one or two extra defensive backs right there because Alabama runs a lot of those. I would make sure to not over pursue Jalen Hurts but focus on containing him (like what LSU did to Heisman trophy winner Lamar Jackson of Louisville). If Clemson can do that, they can get him into situations where he has to throw. If this game is anything like the Fiesta Bowl, they can pick him off four times.

Going into the game, Alabama is missing one key factor, offensive coach Lane Kiffin. Kiffin had already agreed that he would take the head coach position at Florida Atlantic, but his plan was to finish the season first with Alabama. Still, he had already started calling recruits for his next job and was late to meetings and after playing a horrible game of offense against Washington in the Peach Bowl, Nick Saban let him go. The replacement of Lane Kiffin for the game is Steve Sarkisian who got in trouble at USC for being an alcoholic. He hasn’t even put on a headset in over a year and is going into a championship game really green.

I have already bet six dollars on this game with friends. In a kid’s world, six dollars is a lot.

Geaux Tigers!! (Both of them)