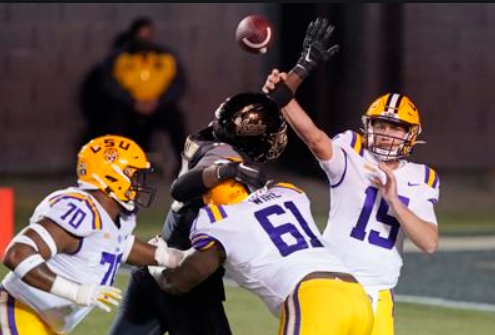 The Tigers showed a much needed, vast improvement from week 1 to week 2. Many of the most criticized players, positions, and coaches had an outstanding and almost unrecognizable performance. Brennan had a complete game and looked like a more comfortable and confident passer. Pelini led a pass defense revitalized by Stingley’s return. Emery made the rushing attack a factor again with 100+ yards.

Brennan looked poised and showed the arm talent that brought him to LSU as a big time prospect. He delivered four beautiful touchdown passes and added another 300+ yard game to his resume. He looked as if he gained a year of experience in the pocket from week 1. Orgeron emphasized his pocket movement and it showed as he was able to step up and deliver good passes down field. He, undoubtedly, has a very talented group of receivers. At its full potential, this offense has the makings to carry the legacy of last year.

LSU’s running backs showed up a week late, but they made their presence known against Vandy. Curry, who started against Mississippi State, was out because of an “undisclosed illness.” His absence made room for Emery’s breakout. Davis-Price and Curry will surely continue to contribute to the offense, but LSU was in need of a breakout from one of the running backs and they found their man.

The defense held Ken Seals and Vandy’s offense to 113 passing yards. That’s 510 passing yards less than last week. I feel much more confident with Elias Ricks, who already has two interceptions, and Stingley matched up on the outside. Those are matchups we can win man to man. The coverage was more refined with less mistakes after a week of focus. This unit, much like the offense, had an incomparable performance to last week.

This was exactly what we needed to see from LSU after an embarrassing opening loss to get us back on track. This is a better team than what last week showed us. GEAUX TIGERS!