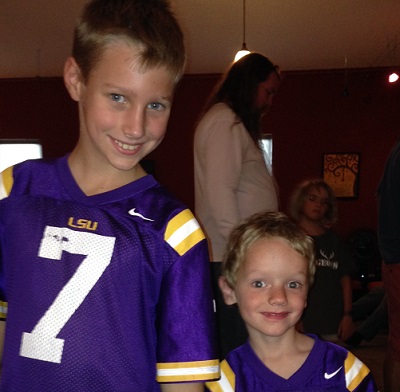 Today, I want to introduce Tiger Nation to a good friend of mine, Zeke. Zeke is six years old and lives in Tucson, Arizona with his mom and three brothers. Unfortunately, Zeke’s father died of cancer when he was nine months old. Because he didn’t have a dad to share his team colors, we started bringing Zeke to our house on LSU game days. Right from the start, he had a ton of questions about LSU football and loved watching it with us. When Zeke was four, he used to fall asleep between my dad and I during the game. When we would wake him up, he would ask who won. If it was a loss, we didn’t have the heart to tell him. After we lost to Alabama in 2014, my dad was feeling depressed. On the drive home he asked Zeke to remind him what’s important in life. Zeke said, without batting an eye, “LSU Football.”

After a hard fought game versus Florida in 2014, Zeke was extremely worried about Kwon Alexander who suffered a concussion. The next day at church he was in the “prayer chair,” a chair you sit in if you have a prayer request. I went to him and asked him about his prayer request. He asked me to pray for Kwon Alexander’s concussion. We did just that.

For Zeke’s birthday, my family gave him a whole lot of LSU decorations for his room and a #7 LSU jersey. I sifted through my football cards to find him some of his favorite players. The person who really hit gold knitted Zeke a helmet beanie with an attached Fournette beard.

Last season, Zeke wrote a rap in honor of Leonard Fournette that was pretty good. I saw a video of him doing it at home. His lyrics included trash talking Derrick Henry. After chanting about how Leonard Fournette is the best running back ever, he stopped and said, “I don’t want to do the sad part.” From what I understand, the “sad part” is about Leonard Fournette’s family who suffered during the aftermath of Hurricane Katrina.

Since my family moved away from Tucson, Zeke’s love for LSU has only grown. On Saturdays now, he watches the games with his mom and his brother Chris. During the week he reviews highlight videos, watches documentaries about LSU players, and listens to sports news.

This past weekend, Zeke and his family came to visit us in Charleston. I was amazed at how much his LSU knowledge had grown. It’s not normal for a six year old kid to know how many sacks Arden Key has so far in the season. I really wish my readers could meet Zeke in person. On his last night in Charleston I interviewed him. Here are some highlights from the interview that will give you just a taste of his awesomeness.

Me: Zeke, who is your favorite college football team?

Zeke: LSU. Big time. My second favorite team is anyone who beats Alabama.

Me: Who is your favorite player?

Zeke: I would have to say Danny Etling. You saw him against Missouri. He really made that touchdown.

Me: What do you think about Coach Orgeron?

Zeke: He won the first two times. He could be like Les Miles. He could coach a bunch of years like him.

Me: We have a stretch of really hard games coming up: Ole Miss, Alabama, Texas A&M, Florida. What are you thinking? How will we do?

Zeke: I think we will win against Alabama. And LSU never loses against Texas A&M.

Me: Do you think Danny Etling and Coach Orgeron can turn the team around and give us an explosive offense?

Zeke: I think Orgeron and Etling and Guice and the whole team have the keys to my heart. When Les Miles was playing Brandon Harris he was like, “Brandon, you are doing horrible. But I’m gonna keep you in.”