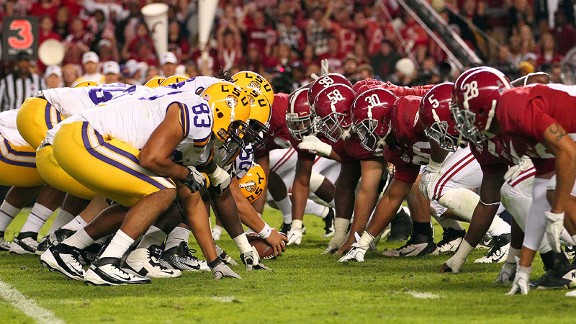 First of all, I want to give a huge shout out to Jordy Culotta from Culotta and the Fan on 1045 ESPN out of Baton Rouge.

After my Aunt Susie and Uncle Bobby told Gordy Rush about my blog, Mr. Culotta reached out to me and set me up for an interview! Then Carly McCord called me on Monday and we did the interview. It will post on their website tomorrow, but Mr. Culotta played a clip of it and talked about my blog on their radio show. You can listen to the last two minutes of Hour 1 and Hour 2 of their radio show, The Morning Drive, from today (November 1st) to hear them talk about the blog (http://1045espn.com/category/culotta-the-prince-on-demand/). This is a dream come true. Geaux Tigers!

Now, as we get closer and closer to LSU’s most important game of the year, LSU fans are getting pumped, especially if they are still on a sugar rush from Halloween night. I wore the same “costume” for Halloween that I have worn every year for three years: an LSU cape, jersey, and purple and gold wig. I also had a Fournette beard.

As Zeke puts it, “My favorite two teams are LSU and whoever is playing Alabama.” This game should be extra exciting because we’re combining both of Zeke’s favorite teams. I admit that part of hating Alabama is just frustration. We’ve lost to Alabama five years in a row. LSU fans have never gotten over 2011 when we lost to Alabama in the National Championship.

When Les Miles couldn’t put together a passing game, after five years of trying, he got fired and Coach O took over. Now, in just a month or so, Coach O has strengthened our offense to a point that we have not had since Zach Mettenberger’s years. We are improving every game. Now that we have Leonard Fournette back and ready, our offense will be next to unstoppable.

As we saw in the Ole Miss game, if LSU can pass a few times and spread out their defense just a little, it makes Leonard Fournette capable of a 284 yard rushing night. Alabama’s All American safety, Eddie Jackson, broke his leg in their last game and is out for the season. I believe we can really take advantage of his less experienced replacement. If we score early and do not let them catch up too fast (no pick-sixes!!), and just do what we did vs. Ole Miss, we’ll get some points on the board.

Our defense will keep us in this game, as they have done all year, but the real key to this game is the offensive line. Can we put a body on Alabama’s NFL-ready defensive front? With fullback J.D. Moore ready to play, I think their linebackers will be afraid to go on the field after two minutes of his bulldozer blocks.

57 years ago, Billy Cannon had a legendary game on Halloween night when he returned a punt for a touchdown and made the game-saving tackle. That was a generational moment that won him the Heisman. My grandfather tells me stories about that game as he was selling hot dogs in the stadium that night. I think Leonard Fournette can have that kind of night with a last second, eighty yard touchdown run that wins the game. I want to be telling my grandkids about this game, about my generational player and Heisman trophy winner, Leonard Fournette.

I really think we can win and can’t wait for Saturday! Geaux Tigers!

My team won last Saturday. We also have a big game this coming Saturday afternoon that is critical for our own chances at a championship game.