The Spring Game and Joe Brady

Hello Tiger fans! As we know, LSU is accustomed to using the off-season to get the fan base excited about a new and improved offense. In past years we’ve seen small doses in the Spring game of LSU’s renewed intentions, but it was never the hope for turn-around. This year I feel like the hype about our offense may be deserved. Sure, there were drops, interceptions, and mistakes, but we got to take a peek at LSU taking a faithful shot at something totally new. With a revised offense, I can deal with sloppy, but I can’t deal with the same old plan.

In Joe Brady’s first four offensive plays, we saw the intermediate part of the field flooded with four and five wide receivers at a time. It was exactly what Brady said he would create. Short routes are the bread and butter and it makes the defense account for everything. I wonder if even Aranda could shutdown such a shocking attack in full force.

When Orgeron said, “I see the offense I finally want,” I was excited but to see an offense that fits this LSU team so well makes Orgeron look like a prophet. With a loaded group of wide receivers and tight ends but no clear bell cow running back and a quarterback as gritty as Burrow this offense just feels right. On one of the first plays I saw we lined up with four wide receivers and a back. The ball snapped, the wide receivers flooded the middle of the field, and the back followed them into the empty flat. That is a play LSU has not run in a while. In the olden days when we needed a few yards we ran it down their throat. This year we’ll ride quick slants, drags, and the flats all the way to the end-zone. How’s that for change?

Oh, and by the way, you might have noticed Derek Stingley’s ball-hawking interception and pure lockdown on every play. Grant Delpit wearing number seven was also a stud. LSU went a little untraditional last year when they gave it to an unproved transfer wide receiver. It’s nice to see them give it back to the defense. I wish we could have seen Rashard Lawrence, Jacob Phillips, Kristian Fulton, and K’laivon Chaisson in action too. Without those four starters in, I can’t really say I saw LSU’s defense in full force. 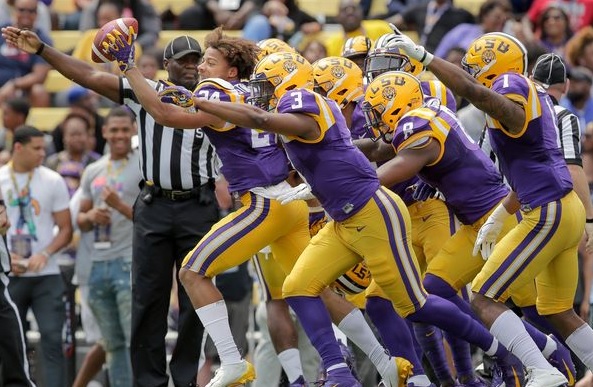