The NFL and LSU 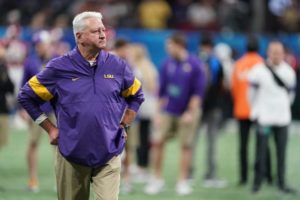 Hello Tiger fans! LSU has finally found the right passing game coordinator in Scott Linehan, former Dallas Cowboys offensive coordinator. LSU fans should be very grateful to acquire a successful veteran mind from the NFL. At 56 he has coached several offenses in the NFL and he knows how to coach college from his younger days. The fans are excited about the hire because it’s a big name hire from a big job in the NFL and LSU is excited because they have another stable pillar and a proven mind who can bring a lot of new material to the table, but won’t fight the established offense. To maintain the standard we set this past season a lot will be required of him. Every LSU fan, coach, and player is putting this on his shoulders hoping he can handle it. With a lot of talent, Steve Ensminger, and a proven offense he should be able to.

Among the biggest factors for him to fulfill the goal of bringing us back to a national  championship are how we develops Myles Brennan, how well he can perform as a play caller in third-down and red-zone situations (which Orgeron declared to be mostly his call), and how he recreates the magic with another great group. Two of the coaches Joe Burrow named in his Heisman speech and credited for helping him improve and succeed are gone now, but we know just how important those coaches can be in the development of players. If Linehan can make Brennan reach his ceiling, LSU will be back at the biggest stage, but that will be the most challenging part of his role. I’m sure he has (relatively) the most talent he’s ever had in a program, coaching those guys up, will be simple for a guy who has made better out of worse situations. Play calling will also come to him easily as he has done it for a living and been through every possible game situation. Scott Linehan was a sure hire and I think he could thrive at LSU like Joe Brady did.

LSU is making the right moves to establish themselves at the top for the next few years. The right hires, strong recruiting, good player development, will help them do that.