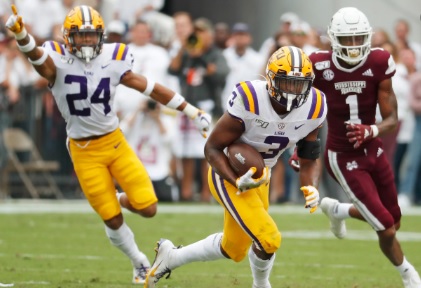 We continue to prove ourselves and answer any questions posed. Mississippi State played at their best and, like last week, we turned them away and the game was never in question. I was very proud of our defense for stepping up to the call. There were several moments when we struggled on offense, but we continued to play and eventually found our groove in Starkville towards the middle of the game. As several other teams in the SEC are struggling, Alabama’s close call against Tennessee (losing Tua to a high ankle sprain that he will get back from in time for LSU) and Georgia getting upset by South Carolina, we remain dominant and unphased.

Only one time all season were we turned away when within ten yards of the goal line and forced to kick a field goal, but yet three times against Mississippi State we did so. Getting those few yards between us and the end zone could have made this a 48 to 13 win instead of a more mild 36 to 13 win. Burrow was clearly disappointed driving down the field and then coming up with just three points. We were about even between throwing and running the ball but did neither well enough to cross the goal line because we tended to close the playbook as the field closed on us. We were 0/5 on pass attempts inside the ten. Two or three of those were drops, one was a sack (which I counted as a pass attempt), and usually they just brought as much pressure as they could because the threat of Burrow throwing over their defense was killed by the back of the end zone. I would like to see LSU use more variety and quick pass plays and screens that are guaranteed. My favorite play in our season opener was when on the 5 yard line we ran a wide receiver screen for a short TD. Against Auburn we should open up our playbook on the goal line. Cole Tracy was the only winner from our unimpressive red zone offense as he hit all three chip shots and scored more than anyone except Burrow who had another heisman afternoon himself.

On one exceptional play Burrow was flushed out of the pocket and running towards the line of scrimmage, he threw a perfect deep ball to Derrick Dillon in the back of the end zone. This is what makes us so explosive and so dangerous. Mississippi State pressured with everybody and tried to make Burrow uncomfortable. He was sacked three times, but also beat them over top on several plays. They took risks to put us out of our comfort zone but we still came through for the most part. We found our best football in the middle of the game and started quickly running up the score, but we slowed to a halt before Brennan went in. We hit a series of deep balls over the top of their defense taking advantage of their pressure, but it started to get to us again on the last few drives.

Our defense was crucial in making this a convincing win. We can say we held them to a touchdown. Their second TD drive came on their last drive against our second and third-stringers. I’m proud of our boys. We created turnovers (2 INT, and a fumble) like we said before the game and tranquilized their rush to 2.8 yards per carry. Jacobe Stevens one hand snag was amazing and Fulton jumping that route was gutsy. Our defensive line dominated their front and were in the backfield consistently. When our Green team is on the field they always bring it and get a sack, a hurry, or force a pass out of the QB’s hands. Our defense had it’s best game. Congrats Aranda and co.

It feels complete. Moving towards Auburn.