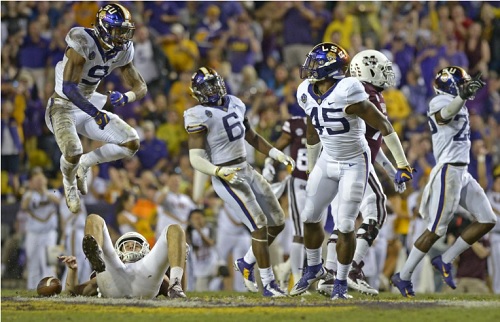 Hello Tiger Fans! Obviously, we didn’t see it all come together against Mississippi State in an Alabama tune up. The good news is that I have a feeling we never needed a “tune-up” for Alabama anyway, especially in a night game in Death Valley. Still, there were many aspects to last Saturday’s match-up that were not encouraging.

Just because we don’t want to lose too much steam from a sloppy win, we’ll start with the positives.

I couldn’t be happier about our defensive performance. Just like I’ve said all season, we are the most opportunistic (4 interceptions) and dominant (3 points allowed) in the nation.

We knew Miss. St. wasn’t going to walk into Death Valley and throw the ball all over us, but we humiliated their passing game. Nick Fitzgerald only had 13 more yards passing than we had yards off interception returns (59-46). Our DBs can thank the D-line for a lot of those, without the pressure they brought Fitzgerald wouldn’t have had those situations in the first place. A combination of winning the trenches, bringing DBU, and confusing the heck out of poor Nick is the same equation we need to use for Alabama. An example for that last one would be the first interception, when the inside linebackers blitzed (Devin White came in hot) and the defensive end s waited a few seconds and then dropped into the seemingly open flats where Fitzgerald threw it right to Michael Divinity. LSU has a way of humbling opposing offenses.

Speaking of humble offenses, that’s a great word to describe LSU’s effort on Saturday. Maybe it was the new gloves that go with the shiny helmets, maybe it was the rain, but something was off with the receivers. Too many three and outs because of dropped passes or bad after-catch efforts. I know that our receiving group is elite and could run with anyone in the nation. Ja’marr Chase and Justin Jefferson are going to have to spend some time with a JUGS machine so we can regain the consistency that could keep us on the field a few plays longer. Luckily, for the receivers, we have an old saying in Tiger Stadium; Chance of rain? NEVER!

This was a defensive line as good or better than anyone in the nation (hello Clemson and Alabama). Joe Burrow didn’t take a ton of sacks but he was certainly under pressure all night. Our run game never really got going. Next week we’re going to have to use some more versatility to avoid the teeth of Alabama (their defensive line). On the bright side, we can at least hang with a couple of future NFL big boys for sixty minutes. We’ll be ready for Alabama. They can’t surprise us. We’re tougher than them.

After two weeks LSU is going to be ready to welcome the crimson tide into Death Valley, “where opponent’s dreams come to die.” We Comin’