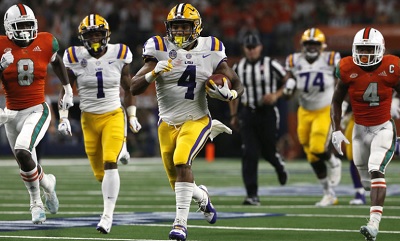 Hello Tiger fans! I’m so happy with LSU’s performance last Sunday. It was incredibly relieving to watch LSU stomp all over Miami for three quarters. LSU was expected to be brought to it’s knees but instead they showed the nation what they are made of!

I had three big questions going into the game. 1) Could Joe Burrow lead the offense and put up points? 2) Which running back would prove himself as reliable? 3) Would Ensminger’s new offense be able to spread the field on one of the nations best secondary’s?

Needless to say, all of those questions were answered satisfactorily as LSU put up 33 points in three quarters.
Joe Burrow made two key audibles that both resulted in touchdown drives. He kept his head throughout the whole game, not throwing a single interception against the nation’s fifth best turnover margin in 2017. When a LSU player was open, he made the throw and when he was flushed out of the pocket, instead of throwing it away, he gave the receiver a chance at a catch.

Nick Brossette was the sweetest surprise of all. He ran for 125 yards and two touchdowns. Who knew! Until last Sunday, I expected Brossette to be a secondary aspect to our offense. Instead, he gave us a huge advantage by virtue of having another back who can get ten yards if you put the ball in his chest.

Ensminger’s offense looked just as we had thought. No more I-formations that used to be LSU’s identity. There were never less than three receivers lined up and LSU used them on a variety of routes.

We had our weaknesses too, but they were unexaggerated and fixable. We were stopped twice within ten yards of the goal line which lost us eight points. It didn’t matter that time but it will in the future. Our wide receivers dropped a few passes but I suspect that’s a lot of first game jitters and getting the feel for things. Lastly, we took our foot off the accelerator in the 4th quarter and started playing conservative. That’ll have to change.

We had a stellar defensive night as expected. Those two interceptions were exactly what you want against a team that takes pride in taking the ball away. We had Rosier running out of the pocket constantly. Our linebacker play was stellar throughout the whole game. The Hurricanes were looking to bruise the ground but they only garnered 83 three yards through sixty minutes on a rock-solid rush defense. We had some busted coverages in the 4th quarter but at this point I’m just not going to talk about the 4th quarter.

Luckily, we have a rather safe chance to fix these mistakes at SLU (who lost to UL Monroe 31-34 on Saturday) before we move to Auburn and attempt to secure the respect we earned across the nation on Sunday night.

Tonight, I’m only looking for another completely unmovable defense, a scoreboard breaking offensive performance, and a killer instinct through out the game. This is our chance to fix ourselves between Miami and Auburn.