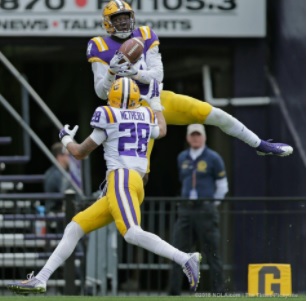 Hello Tiger fans! For many years I heard every LSU coach make preseason claims about what he has implemented in the offense and how he has restored a 50/50 run to pass ratio. In the past, those promises proved empty. There has been a lot of convincing talk in the lead up to the spring game, but I needed Coach O to SHOW me the change. Well, he did just that on Saturday afternoon.

When the purple and gold walked onto the field and ran a three wide-receiver spread formation and threw a simple, unpretentious out route I thought I had accidentally turned on Clemson’s Spring Game. I couldn’t believe my eyes! Then as if to reassure me that I hadn’t dreamed it, LSU lined up in a four-receiver set and picked up fifteen or so yards on a quarterback scramble. I was left, mouth gaping, thinking, “what happened to the old LSU.” I guess that’s just, well, the old LSU. Tiger Nation, presenting the new LSU!

Let’s take a look at what promises and expectations (besides the afore mentioned scheme of Ensminger) were fulfilled and what surprised us.

-We expected our receivers to be the heart and soul of the offense.
They did their part and more. They put our quarterbacks under the best light possible by having the finesse and consistent playmaking ability of an all-pro NFL group. The route running was beautiful, their hands were reliable, and they could always get a few extra yards after the catch or in Justin Jefferson’s case, 88 extra yards after the catch. I could go on all day with buzz words like athletic, talented, and dependable but for the sake of time we’ll move on.

-We knew our linebackers would be vigorous and stonewall.
You get what you pay for with Dave Aranda. Thank goodness we pay him so much! I don’t even want to touch on what Devin White brings to the table because we all know that when he walks onto the field it’s game over. Let’s talk about those new guys. Jacob Phillips had a great day. Some of the hits he put on people were pretty cold-blooded. On the other side, K’Lavon Chaisson was making Arden Key proud. Orgeron estimated that in a live competition he would have counted five sacks!
-We thought our defensive backs would have their flaws but also show their athleticism.
Our defensive backs weren’t a huge problem. Sure, they made some mistakes that showed their inexperience but that’s what we expected. What I also saw were flashes of brilliance like when John Battle flew across the field and picked off a Myles Brennan pass or when Mannie Netherly made a tremendous, touchdown saving, deflection. Overall, they hung with some of the best receivers in the nation.
Now what surprised us…

-Wow! That D-line is something else!
If the Pete Jenkins’s unit had merely done their job dominantly then I would have put in this caveat as being an expectation fulfiller. However, the performance we witnessed was more than dominant. I was honestly worried if our backfield would ever recover. The quarterbacks were under pressure all afternoon and with Brennan (the lesser of the three in scrambling and running), it showed. Running backs were brutally harassed before they could reach the line of scrimmage. Their explosiveness, technique, and agility didn’t match up with their size and toughness. That was true across the line but if I had to choose an MVP from the trenches it would’ve been Breiden Fehoko.

-Clyde Edwards-Helaire stole the show.
I think Derrius Guice switched jerseys with Helaire. I saw a lot of purpose and anger in the sophomore’s runs that reminded me so much of Guice. Nick Brossette seemed uninspiring next to Helaire who rushed for 74 yards on 14 carries. He’s got all of the boot chanting his name now. I don’t think any true fan would argue that Clyde Edwards-Helaire is our starting running back.

-The quarterback race didn’t turn out quite how I expected.
Justin McMillan had the best day but it seemed even more “dead even” than many of us thought. Myles Brennan didn’t get quite as many reps as I predicted and Lowell Narcisse has a beautiful ball that I hadn’t anticipated. Orgeron credits McMillan’s success to his “confidence” and I can see the meaning in that statement. He had more control over the team than the other two but it was hard to make any big conclusion from any of the quarterback’s performance. Although, before I close this out let me tell you that we have aptitude at quarterback. The consistency, accuracy, leadership, and decision making of these players was something I’m not used to seeing as a Bayou Bengal.

I hope this article left you hungry for the season and excited for the new Tigers!