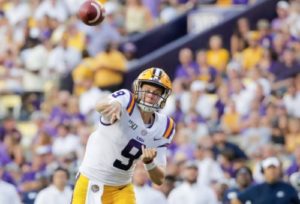 Hello Tiger fans! From the very get go last Saturday, it was evident that LSU meant business. We were strict teachers for a lower opponent and didn’t take disobedience lightly. We played as crisp, well executed, and dominant season opener as you’ll ever see. (P.S. I actually got to go to this game thanks to generous family friend, Keith Mayeaux, in Baton Rouge!)

LSU threw short routes and had a high completion rate with no drops and plenty of yards after catch. Our offensive scheme worked ideally. We ate first downs and matriculated the ball down the field. A total of 14 different wide receivers, tight ends, and running backs caught passes. Joe Burrow 23-27 for 278 yards inside of the half. No interceptions or wasted throws, just getting it done. We got talent in space and created big plays. We kept the deep ball threat real all the while. Joe Burrow didn’t run it once because he was never forced out of his clean pocket where he could make his reads comfortably and throw it to an open man.

After going 42-0 at the half, we all wanted to see Myles Brennan. He came in and delivered immediately with some nice passes and a TD drive. He looked a little more poised this year and these game reps were gold for him. He throws a good ball but had a few inaccurate or errant throws.

Although nobody stepped up and out of the running back by committee, we saw tremendous talent from the freshmen up to the veterans. Granted, the offensive line created gaping holes that made it easy to burst through the line and get those first few yards, but they did the rest. Clyde Edwards-Helaire got by far the most carries and is the most experienced back on the team but the freshman tandem had explosiveness and shifty maneuvers that got me excited. Chris Curry is an angry runner. He, like Helaire, will never get tackled by one guy. The running backs are our biggest weapon leaking out of the backfield. Twelve times, Joe Burrow either checked down to a running back sitting in the middle of the field on a dump route or sneaking into the flat, or sometimes the Offensive line would go get the linebackers and Burrow would get it to Helaire with blockers in front of him.

Here’s an impressive stat: we were a full 100% (7 for 7) in red-zone TDs and currently lead the nation after finishing 119th in that same stat last year. Also, we were 8/14 on third down. Those two areas are what make some teams agonizing to defend. We had great variety on the goal line which took some guts that we clearly didn’t use to have. On our first touchdown, it was third and goal, and Burrow pulled it and threw the covered slant. It was in the perfect spot and Ja’Marr Chase made a nice catch. We also threw a quick screen to Marshall sprinting inside, a perfectly executed fade inside the ten-yard line, and a quick hitch to Marshall (who caught three touchdowns) that got the defender on his back so he could come to the ball. And when we needed to, we punched it in old fashion.

Our defense was a beautiful thing to see—a savage machine too beautiful to describe with the inventory of the English language. If I said we were ‘consistent,’ it wouldn’t account for all the exceptional things I saw, like the hard knocks, tackles for loss, and the two forced fumbles. If I said ‘aggressive,’ you might think that we over pursued or left our feet and missed a tackle. Despite the language barrier, I face as a writer, we all know what we saw our defense accomplish last Saturday night.

I dare future opponents to come at LSU with a triple option. We demolished every one of their tricks with assignment football and they not only got single digits, like I boldly predicted, but held them to less than 100 yards. We had somebody penetrating and blowing up the dive, the power, the pitch, the keep, and, rarely ever, the pass. Despite the absence of Michael Divinity our linebacker play was outstanding. Damone Clark filled Divinity’s role and had nine tackles. Patrick Queen, Jacob Phillips, and K’laivon Chaisson (thank goodness, he’s back) had great games. Our safeties played up and aggressive and were on the ball on every play and even in the backfield on many occasions. Delpit had the swagger necessary to wear the number seven, and it looks better on a defensive back, but Jacobe Stevens was balling out. Stingley looked bored out on the perimeter guarding a non-threat, but his greatest contribution in his debut was his punt returning.

Freshman ruled special teams. Stingley was a lethal returner like we’ve never seen. He was making guys miss and finding his way upfield. Fellow freshman Cade York never missed, contributing 13 points to the cause.
LSU played 13 freshmen from last year’s class throughout the game. We rotated so many names through every position and they all impressed. The depth LSU has after recruiting the best and improving players is the strongest in the nation.

We didn’t play down to the opponent, and we kept our foot on the pedal all the way through even with our 2nd string or 3rd strings on the field. This is what the winning mentality and discipline of a championship team looks like. Geaux Tigers!