Hello Tiger fans! LSU had their biggest win of the year and their third top ten win putting them, rightfully, at the number one spot. It feels different walking around as the number one. My chin is a little higher and my chest is a 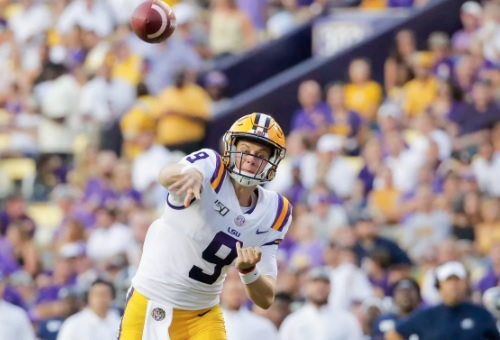 little bigger. We knew Auburn would bring a dog fight to us in Tiger Stadium and they sure did. We struggled at times but also looked like we have through every week so far and no different against one of the best defenses in the natio

LSU ended with half of what we were averaging on the scoreboard. This wasn’t because we were unable to move the ball consistently on the Auburn defense, but because of another week of struggles in the red zone. We were forced to take a field goal within two yards of a touchdown and didn’t convert on a 4th and goal line (an 11 point loss). A similar story to last week; we just lost our rhythm as soon as we hit the ten yard line.

The play calling was conservative. Not conservative the way we used to use the word. Our Tigers were still mixing up run and pass, but it was nothing Auburn hadn’t seen. Just power right, power left, and a fade or hitch in the end zone. Teams have found it much easier to cover our spread in the end zone because they can play in front of all the short routes and not worry about giving up anything behind them. When they only have to cover these shallow zones they can bring much more pressure and Burrow and Co. have to try to improvise the play while escaping the pocket instead of sitting back and finding a gap in the coverage. We have to see LSU do something more on the goal line that will make the defense account for more.

On our eighth unsuccessful play of the game we finally went for a wide receiver screen to a four receiver bunch on the left that failed, but if we do that from first and second down we should be able to spread them out and punch it in.

Although we struggled inside our ten yard line a couple times it was encouraging to see us be able to throw it, run it, and drive it on what is probably the best defense we’ll see this year. Their defensive line was what it was expected to be. Derrick Brown and Marlon Davidson were crazy talented and as good as they are, they rarely got through our pass protection. We struggled running the ball through the A and B gaps, so we just avoided running it into the big bodies up front when we didn’t have to. I still consider our offensive line as tried and true now that they’ve protected Burrow (who added another 300+ yard game to his resume) from the best defensive line in the country. Their secondary, a continuation of their very strong defense, struggled covering our receivers and we made them feel the renewed presence of Terrace Marshall who got right back to business. We didn’t feel it while he was gone but Marshall is a key part of the trio of receivers that gives coaches nightmares.

There were significant holes to the outside for Helaire who ended the game with 26 carries and 126 yards, both big numbers for a guy often overshadowed by our showtime passing attack. The offensive line gets MVP for opening holes and only letting Burrow get sacked three times a number our defensive front shoved right back at Bo Nix who was sacked three times, but was also called for two blatant intentional groundings.

If we capitalize on scoring and Stingley doesn’t fumble in our red zone on punt return this game could have been a big 13 to 37 win at home, but its not playing in the SEC west if you don’t have to battle. To win a close game against a good team when each team is making big plays and mistakes is as good as a blowout.

Congrats Tigers! We’re finally headed to Tuscaloosa for a game of the century set to be as good a game as it gets.