Crystal Ball of a Tiger Optimist 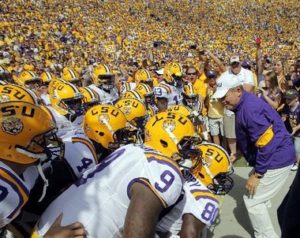 I’ll admit that I am the ultimate optimist and I apply my optimist filter to every preseason college football ranking I can find. Therefore, I won’t mention here the polls that are less favorable to LSU and have us ranked NO 16 or NO 20. (Warning: Ignore the NCAA or AP polls). The good news, however, is that my optimist filter doesn’t need to go into overdrive.  In at least half of the polls I found online or in sports magazines, such as Lindy’s Sports and ESPN College Football 2016, LSU is ranked NO 7 or better.

According to the ESPN preseason Coaches’ Poll, LSU is ranked NO 6. In ESPN’s power rankings, they put LSU at NO 5. USA TODAY had LSU at NO 6, as did CBS Sports. On this month’s cover of Lindy’s Sports, LSU is ranked NO 9. My dad bought me that magazine even though they had Alabama ranked as NO 1. HEAVY’S top ten ranked LSU as NO 7 and Alabama as NO 3, probably because Alabama still isn’t sure who’s going to be their starting QB and none of them are great options. Campus Insiders released their new polls and LSU is ranked NO 1. Campus Insiders is my new favorite website!

It’s not only the national rankings that have LSU looking good. Leonard Fournette is sitting pretty at the top of most Heisman lists. Athlon Sports released their preseason top ten SEC Heisman list and they have Fournette ranked NO 1. No surprise there. But Athlon Sports also listed Brandon Harris on their Heisman list as NO 8. Now, that is a shocker, but I’ll take it! If Athlon Sports is right, we’ll be national champions no matter what! I won’t list out all the Heisman lists because I don’t want to bore you. Every list basically includes Leonard Fournette, Christian McCaffrey (RB, Stanford), and Deshaun Watson (QB, Clemson) as the top three, just in various orders.

Lindy’s Sports ranked Les Miles NO 3 for best head coaches and the same for Dave Aranda for best assistant coaches. I definitely agree with that and I’m glad they didn’t underestimate the Mad Hatter, even though he almost got fired last year. However, they neglected to mention anything about Cam Cameron. With a developing Brandon Harris, a Heisman trophy candidate running back named Leonard Fournette (but don’t forget Derrius Guice or Darrel Williams), talented blockers up front like Ethan Pocic and William Clapp, and a set of speedy wide receivers like D.J. Chark, Travin Dural and Malachi Dupre (not to mention incoming freshmen like Dee Anderson, Stephen Sullivan, and Drake Davis) we may finally balance our rushing and passing and put up serious offensive numbers. I wouldn’t be surprised if we routinely put up 50 points in non-conference games and 30 points against SEC defenses. With numbers like that and W’s against teams like Ole Miss and Alabama, Cam Cameron could very well win assistant coach of the year.

Take a look at my two favorite rankings, one for the Heisman and one for teams: