Corona and the Draft

Hello Tiger fans! While Corona has taken away some of the excitement of the afterglow of LSU’s greatest season, the silence of a world on lockdown has also added to the lingering satisfaction for this LSU program. Without any March Madness or NBA Finals or 2020 Olympics, the sports world can 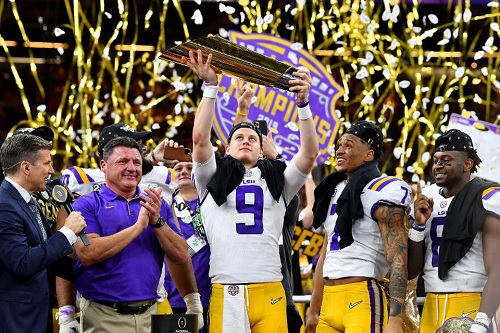 Watching our Tigers join the ranks of the NFL from their living rooms won’t be quite the same as a live event, but the NFL is pushing through with a virtual draft. We won’t see Joe Burrow walk across the stage to accept the first round pick, and we definitely won’t see him give a teary-eyed hug to his new team’s representative. Instead, LSU fans will have to settle for a compromised version of what was supposed to be the greatest draft of all time for the Tigers. More players will be drafted in the first round and also in the complete draft than any college team ever before. Unfortunately, this draft will not be as enjoyable and will not have any of the same class and fashion as before, but all the same for these LSU players who will again set a couple records and separate themselves from the competition. I plan on crying just the same even if it is just a Bengals GM in his basement announcing that he has claimed Burrow.

I’ve never cared so much about any crop of Tigers and I want the absolute best for them in their careers. I also trust that they will make the best of any career. Joe Burrow said in a pre-draft interview that it would be an “uphill climb” wherever he goes to make them a contender. For many other Tigers, their destiny is still very promising in the very near future. Perhaps Justin Jefferson is picked by Tampa Bay and will play with Brady and Gronk at the end of their career. Perhaps Thad Moss will become a reliable target for Drew Brees in his home state. The future is yet to be written for these Tigers that created so much magic at LSU.

After the draft we can analyze each pairing, but right now the moment is full of only hope and excitement. GEAUX TIGERS!