Big Win Over the Rocky Top 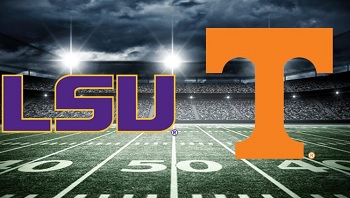 Hello Tiger fans! Sadly, there are only two more games left in the regular season, and probably only three games left before it’s another eight months of torturous waiting. It would be terrible to end the season in a streak of poor performances, so our beloved Tigers better give their fans a lot to be excited about before football season ends for good.

Tennessee got lucky last year on multiple occasions. They reminded me of Auburn in their last championship year. Hail Mary’s always went their way. Big plays magically appeared to fuel their comebacks. This year it seems that they are getting paid back with incredibly bad luck. They have yet to win an SEC game and they have the 125th ranked offense in college football. In their last game, a 5-5 Missouri team scored 50 points on them. For LSU, this Saturday is a chance to hand a weak team a blowout.

We may have to rely heavily on our run game. They give up 257 yards per game on the ground while their pass defense (their one bright spot) is 5th in the nation. That’s on paper. Truthfully, they haven’t played a good pass offense yet. Our receivers are primed to expose them. I fully expect Danny Etling to have a great game throwing short and dropping dimes over the top. This is his last year and although he didn’t bring us a ring or even a win against Alabama, he has still been an important part of the LSU family. Wouldn’t it be nice if he could close out his career with some bigtime games before he hangs up his No. 16 jersey?
We saw a pretty hyped up defense last week, and if we play with the same speed and intensity we won’t just shut them out but we will embarrass an already shameful offense. I hope Dave Aranda blitzes Donte Jackson every time he sees an unprotected backfield. Expect an aggressive Devin White to have his signature game. If we don’t miss tackles and we make the right angles on every down they will end the day with negative yards. This could be a multi-interception and double-digit sack game for our Bengal Tigers.

This is one of the last games in a purple and gold uniform for many of our senior leaders and should be a great opportunity to start sealing their legacy. I am expecting a big win over the Rocky Top this Saturday.