A Win for the Great State of Louisiana 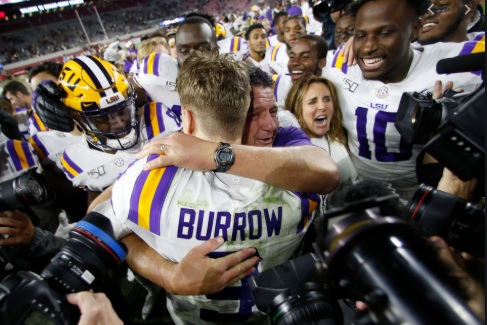 Hello Tiger fans! With this article, I would like to describe what this win means to me and Tiger Nation and commemorate the characters that represented our program so passionately on a stage that doesn’t get any bigger. These characters were all woven into our story in different ways but under one goal: bringing home a championship. Their personality, mental toughness, and determination were palpable as we hit a huge milestone on a path that goes above and beyond.

Among these that painted “the great state of Louisiana” in the best lighting last Saturday were Clyde Edwards Helaire, Joe Burrow, Thad Moss, the best trio of receivers in football, our defensive line, Dave Aranda, the Brady/Ensminger duo, the man we’ve come to love more and more, Coach O, and, believe it or not, Derek Stingley. Each of these characters influenced our story in different ways as we’ve risen to the top. They were put on a pedestal in Tuscaloosa and performed brilliantly.

When Clyde Edwards-Helaire had the ball in his hands, I could feel his will being imposed on those first down markers and anybody in between. His heart was unstoppable and I will mimic his effort in every down I play of football. After the game, he described his determination to get any amount of yards: “throw your heart over the line and your body will follow.” Several times when our receivers were all covered and the pass rush was closing in on our quarterback, Burrow would get the ball to Helaire and trust that he would get the first down no matter how critical or impossible the situation. His running style is unmatched. After a long drive, you know that Clyde will get us into the end zone in some way or another, whether it be supermanning over the pile, breaking three tackles in one explosive move and waltzing into the end zone, or turning a tackle for loss into a walk-in touchdown with one signature spin move. He proved to everyone who said he couldn’t be a bellcow back like Fournette or Guice, that he is all or that and more.

Joe Burrow walked into the game of the century completely confident. They may as well give Burrow the Heisman now. He completed his first 13 passes against the best secondary that we’ll play all year. We know how efficient a passer Burrow can be, but perhaps his greatest feats were accomplished with his legs which accounted for almost 100 yards, a season high. On the last drive he made two crucial plays on the ground. One was on a zone read that they had set up all game. Burrow pulled it and was gone for 15 yards. The other was off a quarterback draw on third down. When his receivers were covered, he made several scrambles to the first down markers that kept drives going. He rarely got sacked, using his athleticism to evade tacklers. His most iconic play was a mirror of a play Nick Marshall made five years ago when Auburn beat Alabama on the famous kick six. Burrow faked the quarterback draw, pulling the hook zone defender up, and then pulled up and threw to Justin Jefferson wide open in the middle of the field. This clutch decision making, athleticism, and ability to make things happen is something that a quarterback has to accomplish when playing Alabama.

Of course, you can’t give Burrow all the credit for leading this offense to victory when the Brady and Ensminger duo had such an excellent night of play calling. They won this game by making those creative calls to run Burrow, a threat Alabama hadn’t adequately prepared for, and by being so effective on third down. I’m sure they had a few things saved just for Alabama and they used them at critical moments.

Rashard Lawrence, Tyler Shelvin, and K’Lavon Chaisson all played like animals on the line. They took it too Tua from the start, batting down balls, making a hobbled Tua run around, and getting as many fair shots as possible on the quarterback. For the first time since 2011, we won in the trenches and got the results to go with it.

A huge key to this win that we have undervalued throughout the season was Dave “the professor” Aranda. For much of this year he has been overshadowed by this offense. I certainly didn’t pay him as much respect in each report as I did last year when that defense was keeping us in games, but he came through in this win on the biggest stage and lived up to the paycheck.

Aranda brought it all at Tua. The green team wasn’t its full self without Divinity, so Aranda brought even more innovative corner blitzes and stunts on third down. Tua felt it physically and mentally all night. Aranda also made one of the biggest plays of the game on a stroke of genius. Knowing Alabama would want to go for it, he changed the defense into zone and picked off Tua at the end of the half to carry a bullet’s momentum into the locker room and a lead we would not lose.

Stingley had his most freshmen moments against some of the best receivers in the country but he fought bravely. He was in bump and run coverage the whole afternoon, right in the receiver’s space, daring the receiver to beat him. It happened a few times, but that aggression is a freedom gifted to us by our offense. Last year we were bound by our offensive struggles trying to not let the big play happen. Now we are free to try to make plays and get quick stops by risking a little more.

Because Ed Orgeron is the face of our program, we have, by far, the deepest roots in our culture, the greatest love for our head coach, and the most undying loyalty of any school in America. All Orgeron cares about is bringing a championship to his “great state of Louisiana” and that’s why, as a player, you want to play for him. This phenomenal team isn’t held together by a bunch of highly paid coaches looking to advance their careers, but by a love of our team, school, and state. That was fully displayed by the tears that ran down Orgeron’s face after the game. The way Orgeron holds this program together would be impossible for anybody but our Cajun, homegrown, gravel-voiced, energetic, Bébé Orgeron.

Lastly, I have cheered my heart out for LSU for eight years, but I have never seen an LSU win over Alabama. I waited like the Israelites in Egypt for this deliverance. My jubilation after this win still hasn’t worn off and I know it won’t in the near future. My love for this team can’t be rivaled and this love has only grown out of the struggles that have come out of each year. The other side of this deep joy comes from my love for competition. I always throw my heart into a football game whether it be my own or LSU. Watching with frustrated tears in my eyes for eight years, I saw the gap between us and Alabama only grew bigger each year. But to see my Tigers win this game and overcome all that has stood between these two programs is a joy that has me busting. We are standing on top of the world right now, folks!

Big win, but just a stepping stone to our bigger goals!