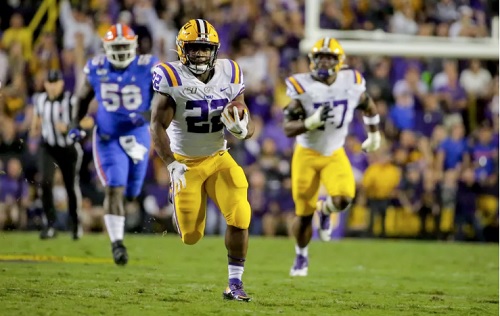 Congratulations Tiger fans, on our biggest win of the year! As commentators said after the game, Florida, a strong football team, gave us their best shot and we still pulled out a solid 14 point win. Throughout the second half we dominated the football game, ending on 21 unanswered points and a powerful conclusion to a game that was bouncing around. Teams that are able to come out of the locker room in the second half as a different team, are often the teams playing in January.

We struggled heavily against Florida’s passing offense. On each one of their scoring drives they marched 75 yards down the field, running about ten plays, and eating an average of over five minutes of clock each drive. That killed us through the first 34 minutes. It wasn’t Kyle Trask, the second string Florida QB who hadn’t started as quarterback since ninth grade, who gave us problems. It was the array of receivers Florida was able to get into mismatches. We mostly went man, but occasionally used a cover 3 zone. Neither strategy worked great and it took most of the night to be able to lock their passing threats down. Orgeron talked about, “stopping 84” (TE-Kyle Pitts) before halftime and then we came out for the second half and Trask rode a Vahn Jefferson vs Derek Stingley matchup on the left side all the way to the end zone.

We realized we couldn’t let Trask wait in the pocket for his receiver to get a step on our defensive backs. We had to get after him and get them behind the sticks, where they would have to shoot for a bigger play and the routes would develop slower. On the ensuing drives we brought a lot more pressure forcing Trask to play like an inexperienced backup. They made some mistakes and we forced a few key stops and Stingley had a beautiful red zone interception that helped us get that separation and kept them from scoring again in the half. When we play aggressive on defense and Dave Aranda gets excited we force three and outs or worse out of good offenses.

We did our thing on offense and they didn’t even try to get in our way. Burrow connected on most of his passes to Jefferson and Chase as usual. Surprisingly, our running game was more dominant than it’s ever been with more yards per carry (9.3 yds) than we’ve had since Fournette’s record breaking night against a bad Ole Miss defense a few years ago. We broke multiple long runs when they spread out to cover the pass and left our running backs shooting like rockets up the field, putting a move on the safety, and getting across the goal line. Most defenses line up in what’s called an overfront, where the line is heavier across from the running back on the strong side of the formation. This is what Florida ran, but to combat this, on one instance, we ran a play designed to go to the weak side of the defensive line. Strongside wingback Thaddeus Moss who had a big game against the Gators slid over to block for the weakside handoff to Helaire for a TD.

Later in the game, Davis-Price broke a long TD run on a clever play by Burrow. Florida was already in an overfront but the weakside defensive end mistakenly lined up on the strong side, leaving the other side of the line completely free. Burrow flipped Davis-Price to his left side and before the angry Florida strong side defensive end could push the mistaken end back to his side Burrow handed it off to Davis Price with all kinds of space, unhindered as he walked into the end zone. Even when they knew it was coming they couldn’t bring Helaire down until he’d gotten 5-6 yards. Just like expected, Burrow stepped up to the situation clear-headed and delivered. The word everybody keeps using to describe one of our best offensive performances is “efficient.” We averaged 10.6 yards per play and usually couldn’t get down to the red zone without scoring on a big play before hand. On 40 plays we scored 42 points. Burrow was more efficient than ever with only three incompletions and no interceptions. This was our biggest test of the year and I still think as highly of Florida’s defense as I did before, but we just weren’t phased.

As expected the nation is hyping up Joe Burrow and this offense more than ever as we move up to the No. 2 spot in the rankings, right behind Alabama. We’re headed for a heavy collision with Alabama in another Game of the Century.

Burrow is at the front of the heisman race now at No. 1 and undoubtedly the best quarterback in the nation.

Headed for another convincing win in Starkville with plenty to play for after what happened on our last visit.