10 Straight Wins and Now the Boot 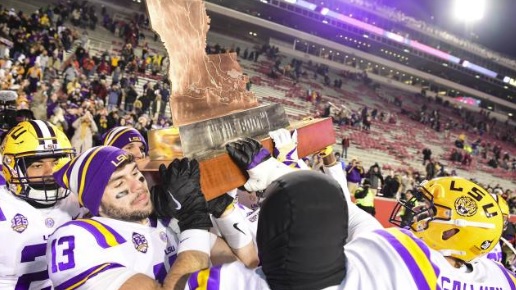 Hello Tiger fans! As we go into the eleventh game of the season undefeated for the first time since 2011, our momentum is completely unhindered, dangerous for anyone in our way. The 2-8 Arkansas Razorbacks provide a chance to rest a few players who have been struggling in the past few games and for our defense to go into bigger games with a little more swagger after a dominant performance against a lower caliber offense.

Arkansas will come into Death Valley rested from an embarrassment against Western Kentucky two weeks ago. Arkansas’ biggest problems that have defined their worst year in program history include, but are not limited to, a pathetic offensive line, a floundering two quarterback system, a defense that let Bo Nix put up 52 points, and a running game that can never make up for all the rest. They run a spread offense, but can’t do anything much after they line up. My heart wouldn’t be able to handle a defensive letdown against this offense.

For LSU, this game is impossible to lose. The distance between these two programs right now cannot be represented on a two digit scoreboard. Seeing what happened to Tua, and how devastating that was, I would put Brennan in after the first quarter. After all, you would like your program’s next quarterback to get enough game time to figure a few things out. There’s nothing our offense still has to prove. The biggest thing for me and Coach O is a shutout. This is a big tune-up game for a defense that struggled against a one-dimensional Ole Miss team. Let’s see how we handle a team with no dimensions before we move into the postseason.

It has been a week of great news in the health department. Kardell Thomas a big time freshmen offensive guard, once thought to be out for the season has made a comeback, and is now going to be ready for the SEC championship. Michael Divinity, who I thought had ruined his career, is back at practice after a short break. He will also, hopefully, be playing in the SEC championship. Grant Delpit will likely miss a week to fully recover his ankle, but he will be full-speed again very soon.

When Auburn defensive linemen, Derrick Brown and Marlon Davidson, outmatched our offensive line it would have helped to have the four star, Thomas. Everyone noticed when Delpit wasn’t as agile as usual and couldn’t chase down the speedy Plumlee. Divinity has been a huge absence for our pass rush on third down. Having these guys back will pay huge dividends in the postseason where each player will make an impact on the game.