We’re not in Columbus Anymore, Burrow 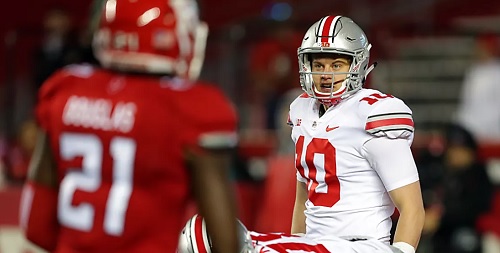 Hello Tiger Fans! My goodness! I thought there would be a slow news period until summer workouts but I was wrong. I had planned on posting a boring article about a game that nobody is thinking about yet, because it’s still ten weeks from now. Sure, in my intended article, I casually mentioned that LSU was looking at a quarterback from OSU but I never thought that there would be any real harvest from it. After all we’ve heard about the three-horse race between McMillan, Brennan, and Narcisse, I had never weighed the possibility of a graduate transfer. But Joe Burrow, formerly OSU’s backup quarterback, has now decided to bring his talent to LSU! It appears the quarterback race is decided.

Burrow has two remaining years of eligibility and can play immediately. He’s smart with the ball and very accurate. He’s used to a similar spread offense at Ohio State. Surprise LSU fans: your savior isn’t fighting out a “dead even battle” in Death Valley. Your savior just threw for 238 yards in the Buckeye’s spring game. Your savior just tweeted, “Excited to be playing in Death Valley next season. Ready to get to work.”

This was a phenomenal move by Orgeron and perhaps the ultimate climax to the offseason. You may meet an occasional Tiger who claims that Orgeron made the wrong move. This fan might say that losing Brennan (who already made it clear in interviews that he is sticking out the battle) could be regretted when Burrow turns out to be an “okay” quarterback. He’ll say that Burrow’s stats are about the same as Brennan’s.

If you have any faith in Orgeron, you’ll understand his move. He saw three inconsistent and unspectacular quarterbacks that aren’t ready to win him a championship. Then, a talented backup quarterback caught his eye on the transfer market and he snatched that shining piece of gold up before anybody else can come down on him.

This isn’t encouraging for Narcisse, Brennan, or McMillan, but they are all competitors. I expect they will embrace it as a challenging obstacle instead of darting elsewhere. Maybe next year if Burrow is a game-changer they’ll leave to a school where they have a better chance to further their careers. I don’t see them beating Burrow out. Orgeron picked him up to be an immediate starter and he won’t disappoint.

This is a big change and perhaps a very needed change for the LSU Tigers. This makes the summer a whole lot more interesting.