I couldn’t have dreamed up a better way to end the regular season than punishing Texas A&M 54-39 for the sixth time in a row.  Tiger nation really needed that to bounce back from the tough loss to Florida the week before.

Derrius Guice broke the record for single game rushing with 285 yards, beating Leonard Fournette’s record from the Ole Miss game by one yard! We got 300 rushing yards and 300 passing yards. Danny Etling had by far his best performance of the season, getting 21 out of 28 for 330 yards. We put 54 points on the board, the highest score all season. We did all this without Travin Dural (knee), Leonard Fournette (ankle), Arden Key (shoulder), and Kendell Beckwith (knee). 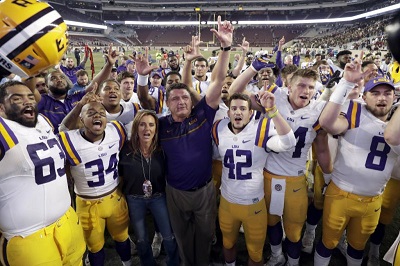 Our defense was not the same without Beckwith and Key, but for the most part held A&M in check. It wasn’t until our defense started subbing and mentally checked out when the game was out of hand at 41-17 LSU that we started giving up uncharacteristic points.

On offense, it was the best game LSU’s played in a long, long time with a perfect run to pass ratio we used to keep the opposing defense guessing. The passing game was reminiscent of when Mettenberger, Beckham, and Landry all played. Watching Derrius Guice made me think it was the second coming of Barry Sanders. Our offensive line just manhandled one of the best defensive lines in the nation, keeping Myles Garret in constant check.

This is the part in a normal blog post where I turn my head to the next game. But since we’re not sure how things will play out with our Sugar Bowl hopes, I’ll talk about what happened off the field. No, nobody got in trouble. However, during the A&M game, rumors spread that LSU had closed in on Coach Herman because the Texas Longhorns were looking to keep head coach Charlie Strong. Later rumors spread that that had been a hoax to make Texas beg Herman to come their way. Then later still Joe Alleva, LSU’s Athletic Director, and Houston’s Athletic Director both tweeted that they were unaware of any deals. This coaching carousel culminated on Saturday when LSU hired Coach O and the Longhorns fired Charlie strong and hired Tom Herman. Now the Longhorns are trying to lure Dave Aranda in to work with his old college roommate, but it sounds like Aranda is staying put. The big question now is who will run LSU’s offense? Stay tuned, Tiger fans!