Hello Tiger fans! The best thing about football: no time to wallow in your losses. We may not have had the best season in 2017, but signing day is coming and the only way we are going to the playoff next year is if we get a great recruiting class. So, get on it Coach O!

There has been a lot of talk about how great the 2019 class is going to be. I’m nowhere near ready to think about our team two years from now. I’ve waited my whole life to see LSU lift up a championship trophy. I’m not waiting another year!

So, let’s talk about the early signees and a little bit about what we still need.

The early signing period went great! We signed 21 of the 25 max. Eleven of those were in state recruits. Much had been said (and hoped for) about Coach O once again putting a fence around Louisiana recruiting, I would say he has done a phenomenal job thus far. We definitely brought in top tier talent for our most needed positions.

I thought our defense was already young and talented but I’m seeing another whole crop of young, scrappy, hungry freshmen defenders. I’m very excited about Jarrel Cherry (a DE/LB from Dallas, Texas). He could very possibly be the solution for the void that Arden Key left. With his explosiveness, speed, hand work he’s the perfect pass rusher to really bring the heat. We signed three other linebackers in Damone Clarke (fast, hard hitter), Micah Bakersville (very athletic, Strength: getting into the backfield and wreaking havoc), and Dantrieze Scott (6’5”, 245lbs…BIG DUDE). 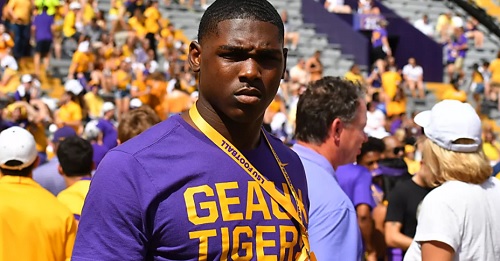 We added some much-needed depth on the offensive line and some talent in the back field to replace Derrius Guice and Darrel Williams. Coach O’s biggest mission was fulfilled on the last day of the early signing period when he signed the No. 1 wide receiver prospect in the nation. Terrace Marshall is from the heart of Louisiana too! He should enjoy LSU’s new offensive spread scheme under new OC, Steve Ensminger.

Tae Provens and Chris Curry—some of the top running backs in the country—could provide a boost to a somewhat depleted running back group. (But I am still depressed that Derrius Guice declared for the NFL.)

Here is who LSU is targeting for the final four spots on signing day:

1.Patrick Surtain (CB) – he will provide more DB support because we know Aranda needs a lot of those and we didn’t sign any.

2.Kelvin Joseph (S) – looked great in the Army All American bowl and has shut down his recruiting process. He will definitely be a Tiger.

3.This is a tossup between (WR) JaMarr Chase and (QB) James Foster. Foster might get reeled in by FSU.  If we don’t get him we definitely should sign Chase.

4. Mario Goodrich (CB) – looks less likely he will be a part of this class, but would be a great addition if he signs with LSU.

All in all, I trust Orgeron as a recruiter more than anything else. If there is one man who can reel in talent in all the positions he needs to fill at the same time as building a fence around Louisiana, it’s Coach O.