The Rally in the Valley

Hello Tiger fans. What a comeback! Even I who was with LSU even in the 4th quarter against Miss. St. was highly doubting our Tigers when it was 20-0 two minutes into the 2nd quarter.  With three big plays LSU was right back in the game. That is what SEC football is all about!

Let’s start with the side of the ball that enabled our comeback: defense. The difference between the first and second half was like cold winter and a sizzling summer. Jarret Stidham threw 13 passes in each half. In the first half, he completed seven of those passes for 160 yards. Now prepare yourself for an astonishing statistic: in the second half, Stidham completed only one pass for six yards! The rest fell incomplete thanks to our defensive backs. Donte Jackson accounted for four crucial pass knockdowns near the end of the game that assured a Purple & Gold Tiger win. Kevin Toliver and Andraez “Greedy” Williams 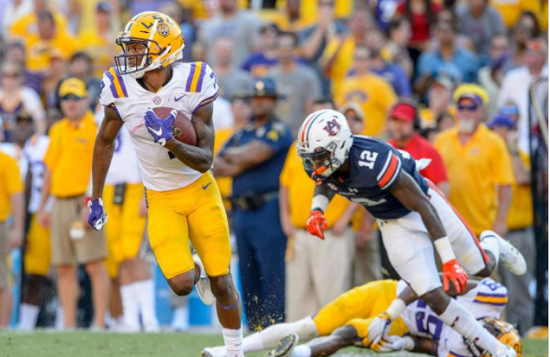 were stride for stride with their receivers. Lock down. DBU!

LSU was not as successful with stopping the run. We said going into the game that Kerryon Johnson could bust a 15-yard run any time a gold helmeted linebacker didn’t fill his gap. Well that was the storyline of the first half. I counted six times in the first half when one of our linebackers (a position group that was a bright spot in the second half) got blocked or didn’t fill the gap, allowing Johnson to get many more yards than LSU would want. Johnson ended up with 160 yards which is intolerable for a defense that specializes against the run. Our defensive line also got pushed at least a yard back for most of the first half. But in the second half the LSU defense flipped the script. Arden Key showed signs of life, finally. His sack on the final play finished off any Auburn hopes of a last second miracle. And what can we say about Devin White. He is an All-American and was awarded SEC defender of the week for the second week in a row.

Danny Etling had a good game against Auburn, just good enough to win. I said previously that if Danny Etling has one more sub-200-yard game we will lose. Well, he threw for 206 yards and included some well-timed back-shoulder deep balls. Our receivers also helped out by making some spectacular catches. Russel Gage made the highlight reels when he laid out completely to make a beautiful catch in the back corner of the end zone.

Derrius Guice also started to find his groove. We saw glimpses of those nasty stiff arms and spin moves that defined him last year. Now that we have other playmakers on the field and a much thicker playbook we won’t need him to pound up the middle against teams like Alabama. It still is a good sign that our biggest playmaker might be coming alive and at just the right moment.

Remember, Auburn is probably the toughest team we’ll play all year besides Alabama. I’m as optimistic as I was in the preseason.