Embarrassment. Admittance. Anger. Annoyance. Frustration. Worry. There is no end to the emotions that went through my head on Saturday.

I had my own football game on Saturday night. It was the first time I got to play on a real high school football field under the lights. My teammates helmets gleamed and sparkled. We won 27–0 and I was feeling high on life. Even though by the time we got home to watch the game it was third quarter, I couldn’t wait to turn on the TV and see LSU taking care of their business versus Troy, by all accounts a weak and fragile opponent. I was on cloud nine.

While my dad and mom heated up dinner and put my littlest sister to bed, I turned on the game in the basement. I was hoping it was something insane—maybe 56–0 in the middle of the third quarter. I glanced at the score and it was 17–0. I was fine with that. A slow dominant win is still a win, I thought. I watched as opposing running back Jordan Chunn fumbled the ball inside their own ten and a horde of Purple jerseys jumped on it. Only a few plays later, I saw Myles Brennan throw a nice touchdown pass to tight end Foster Moreau. Nothing about those four plays indicated to me that LSU was losing. Everything was all right. “LSU has the game under control,” I called up to my dad.

Just as I was feeling foggy headed about why the scoreboard didn’t change to 24-0, my dad came in and yelled “What?”. It had been 17-0, Troy! My brain had not, could not compute a losing score. It was now 7-17 Troy. Then I realized another thing. Myles Brennan wasn’t there because the game was over and LSU had it in the bag; it was because Etling wasn’t performing well. 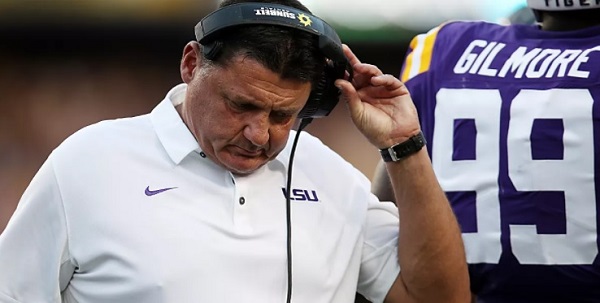 Once I got over the shock, being an eternal and hopeless optimist, I quickly looked at the bright side. We’re only ten points down and maybe this is the game Myles Brennan comes in as a freshman quarterback straight out of high school and saves a cursed LSU season. Then as I watched Troy go three and out, I thought How is this the same defense that just gave up 17 points to Troy? But it was no more than six plays into the drive when Brennan showed that he was still a freshman. He threw a pass right into three shiny Troy helmets. Interception. Deflation once again.

I realized right then what LSU fans across the nation were thinking, this is going to be a long football season. When we can’t even guarantee a win versus Troy, we have problems bigger than my worst fears could conjure. In my four seasons of following LSU football, we have always struggled on offense. But we were never a team that could easily be written off by our opponents. What I saw Saturday was coaches being outcoached and an LSU that crawled up in a ball and got tossed around by an opponent with more grit, drive and determination to win the game.

Still, as a fan, I have no intention of giving up on these Tigers. I wore my LSU shirt to school on Monday, still proud but secretly thinking how easy it must be to be an Alabama fan these days.

I’ll hang in here, because I bleed purple & gold. It’s not about wins and losses, it’s about the Bengal Tigers. The tradition. The history. The love and the loyalty that comes with being a true fan. And I still hope and expect to see our Tigers roar in the Swamp.