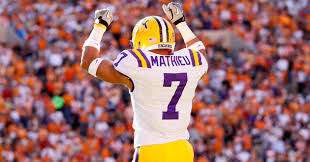 Today we’ll continue our new series about all the greatest players to put on the #7. In my last article, I talked about the player that really gave the #7 legendary status, Patrick Peterson. Now today I’ll talk about someone who came on during Patrick Peterson’s last year and elevated the prestige of this number further still. Officially, he is named Tyrann Mathieu. Unofficially and affectionately, he is known as the Honey Badger. And he is my hero.

Unlike Patrick Peterson, Tyrann Mathieu was a Louisiana native born and raised in New Orleans. Living in New Orleans came at a cost, though, as Tyrann Mathieu lived in places where shootings were common and drugs were passed around every day. His mom ran off as soon as he was born. Tyrann didn’t meet his father until he was ten years old, which is probably for the best because he went to jail for murder. For a while. Tyrann lived with his grandfather but soon he died. He asked his mom if he could stay with her and she flat out told him “No.” With very few options, Tyrann moved in with his only living aunt and uncle. After Hurricane Katrina, they evacuated to Texas and spent a year homeless. That was the point in his life when he started doing drugs to take away the pain of his life. There was a point that he was arrested and even considered committing suicide in a jail cell. Tyrann got addicted to drugs because he said they “evened out his highs and lows.” Most of Tyrann’s friends did drugs too. Reading about his terrible childhood makes me realize just how blessed I am.
Eventually, Tyrann and his aunt and uncle were able to get back to New Orleans, and somehow he managed to attend St. Augustine, the same school where Leonard Fournette later played. He realized his true athletic ability there and became an incredible cornerback. Undersized and under recruited, LSU saw something special in him and offered him a full scholarship. After a highly productive freshman year at LSU (2010), his sophomore campaign was phenomenal (2011). He led LSU to their first undefeated season since 1958, and was a Heisman finalist. It was during this year that he received the nickname “Honey Badger” for his aggressiveness and small size. His teammates said that the Honey Badger “takes what he wants” and indeed Mathieu was known across the nation for forcing fumbles and knocking down passes. As Les Miles quipped about the 5’9”, 165 lbs defensive back, ‘when he looks in the mirror he sees someone who is 6’4”, 300 lbs’. That sums it up for the Honey Badger.

Tyrann went from being a homeless boy in a dangerous neighborhood to the best defensive player in college football. Even though he was a star in college football, neither of his parents so much as acknowledged him, much less patted him on the back after a game. I can’t even imagine how hard that was for him.

In 2012, many people thought it would be his year and that he would win the Heisman trophy. Unfortunately for Mathieu and for LSU, he failed two drug tests and was released. He went to rehabilitation and eventually recovered. The NFL still considered his past problems with drugs to be an issue so he wasn’t picked until the third round. Patrick Peterson, by then of the Arizona Cardinals, is said to have encouraged the team leadership to take a chance on the Honey Badger, and so they did. Peterson helped him out as a friend and teammate and really took him under his wing. Mathieu also became a Christian and turned to God for help. When he suffered a potentially career ending injury in 2015, he asked for prayers and said he could do all things through Christ who strengthened him. Now after four years, Tyrann Mathieu is the highest paid safety in the NFL, still known by everyone across the nation for his tenacity and making incredible plays.

After reading this, hopefully you’ll understand that he’s not just my hero because of his swagger and supersize talent. It is because of where he came from and how he got through it even when all the odds were stacked against him. There are a lot of players who have gone through similar struggles with drugs and alcohol (e.g., Johnny Manziel and others). Hopefully, Mathieu’s new life as a Christian can be an example for them too. As Mathieu replied when asked how he cleaned up and survived even when none of his other family members did: “I’m a warrior.”

I am going to start adding an LSU trivia question to the bottom of each blog post. This should keep things fun. Try not to just Google it!

TRIVIA QUESTION:
In 2010, when Tyrann Mathieu played alongside Patrick Peterson for a year at LSU what was his number?