Hello Tiger fans! Our Bayou Bengals had a lot to live up to after that stellar BYU performance on September 2nd. While we made some mistakes against an overmatched Chattanooga squad, LSU’s performance did not disappoint.

Best by far were the big plays, highlighted by multiple Danny Etling long balls, some great catches by our up-and-coming receiving core and an explosive punt return(s) by D.J. Chark (I have the plural there because he had two, but one was called back for a silly penalty). The big plays made for a much more exciting game. At one point towards the end of the first quarter, Etling was 4/5 for over 200 yards!

After Etling’s initial burst, however, our passing attack took a turn for the worse. Etling got less than 25 yards on four more completions out of nine attempts. And even some of his best completions were into double, triple, and even quadruple coverage. A throw over the deep middle into triple coverage was miraculously caught by Stephan Sullivan, while yet another long ball was slightly underthrown into four raging Chattanooga defenders forcing D.J. Chark to make a stunning grab right over their heads. He went 8/14 for 227 yards on the game, but if he underthrows deep balls this week against a stingy Mississippi State defense, it will not have the same happy result as this past Saturday. 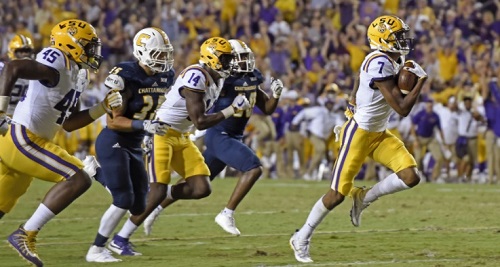 Our run game was as good as ever. We got 222 yards total between Guice, Darrell Williams and Nick Brossete. Yes, that’s right. Nick Brossette came in late in the game and put on some angry runs. He looks like a guy who is tired of sitting on the bench. Derrius Guice had 100+ yards once again. This time he got them on only fifteen carries. We saw some more explosive runs for bigger yardage than we did against BYU, which helped our scoring offense. We got four touchdowns on the ground. Derrius Guice ran with as much anger as ever, leaving opponents either flat on their backs or hugging air. I also noticed that Darrell Williams looks as good as any other running backs in the SEC after Guice. This really shows how LSU has talented running backs coming out of our ears.

Defensively LSU also dominated. We may have lacked the amazing stats that we created vs BYU but never the less we remained strong. LSU let Chattanooga wake them up with an initial drive that ended in three points for the Mocs. After that drive LSU was aggressive and ready the whole game until they went back to sleep near the end of the fourth quarter and let Nick Tiano & Company rally another march downfield that ended in a touchdown.

Our defensive backs played exceptionally well, creating turnovers and pass blocks when the ball came their way. It’s worth mentioning that after Andreaz “Greedy” Williams secured his starting spot with his second interception this season—kicking Kevin Toliver to the bench. Donnie Alexander made his season debut with eight tackles, regaining his starting position with talented new freshmen ready to give him the boot. Devin White led the team in tackles once again with nine. That guy is a beast and the core of our defense. I noticed a much heavier pass rush on LSU’s part. We ended the game with five sacks. K’Lavon Chaisson and Corey Thompson led the way with two each.

Did we fix all of our problems? In our run-pass ratio, we got ten more yards passing than running. Although there were still more running plays, it was closer to 50/50 than the last game and I was pretty happy with the ratio. We only kicked a field goal once in the red zone. Otherwise we scored a TD on each trip to the red zone.

As for our special teams, we missed two field goals out of three attempts. This is an ongoing (and concerning) problem. Our kickoffs, however, were much better. Cameron Gamble got it in the end zone multiple times. D.J. Chark returned two punts to the end zone (evn though as I mentioned one did not count) which is incredible. As for turnovers, Andraez Williams snagged his second and third interception although one was ruled down. True Freshman Kary Vincent also made his debut in style with a one-handed interception for the record books. This definitely answers our problems with creating turnovers. We received ten penalties in the first half but after Coach O gave them a piece of his mind, in very colorful Cajun French I’m sure, we only committed one in the next two quarters.

Overall this was a great game played by our beloved Tigers. We look quite ready for conference play.
GEAUX TIGERS!