Hello Tiger fans. Wow. I hope y’all were as impressed as I was by Saturday night’s performance by our beloved bengal tigers. What does an optimist say about such a flawless game?

LSU entered the game as a 12.5 point favorite. Not only did they double that prediction, they put on a more convincing win than I had even hoped for. The final score doesn’t tell us half of what LSU accomplished. The stats are unbelievable on both sides of the ball.

The game was non-competitive from the start thanks to Dave Aranda and our Tiger defense. BYU never crossed the fifty-yard line. (I am not going to mention the last time that happened in the Superdome, but it did, unfortunately, involve LSU) BYU had less rushing yards then they did points (hint: they had -5 rushing yards). Nola.com reported that the only time LSU ever held an opponent to less than that was in 1982 under the same D-line coach Pete Jenkins. That should show you just how much legacy is behind our defensive line. With only five first downs, BYU only possessed the ball for 18 total minutes.

Going into the game, there were thirteen suspensions which tells you a lot about Coach O’s tight line of discipline. Because of this 23 players played their first down in Purple & Gold uniforms, 17 of whom were true freshman. Two of the suspensions were Kevin Toliver and Donnie Alexander, both starters at key positions. Also, Arden Key continued to be sidelined due to injury. It turns out, our defense was deeper and more talented than we had imagined. Think about what we’ll do when we have our full team back! 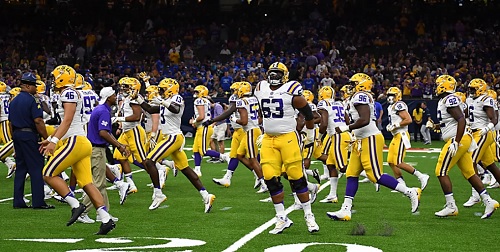 LSU’s young defense adapted well to Dave Aranda’s 3-4 scheme. We saw a lot of our linebackers plugging up holes and making tackles in the run game or keeping up with tight ends in coverage. Our freshman played like a veteran crew. Outside linebacker, K’Laivon Chaisson (who led the freshman in tackles with three), as well as fellow defenders Tyler Taylor and Grant Delpit all started and made a huge difference. Not to mention sophomore Devin White, who led the team in tackles with five, or redshirt freshman Andreaz “Greedy” Williams who snagged the only interception on either side of the ball. He was in playing in place of suspended starter Kevin Toliver. I would be worried about losing my starting job if I was Toliver.

As Brock Huard and Bob Wischusen pointed out while covering LSU’s game on Saturday, “LSU’s DBs are running the routes for the wide receivers.” From what I saw, the BYU had no desire to keep testing our defensive backs. I don’t blame him. There was never a busted assignment on LSU’s part or even one big play for BYU. Besides letting BYU slip in a few passes to their tight end, LSU’s defense was near perfect.

I can’t wait to see how our defense does in conference play.

Our offense did better than I expected, even if the score doesn’t show it. We ran it up the middle almost the whole game, but we got 7 or 8 yards each time. That points to a dominating offensive line (two true freshman started on the offensive line, Ed Ingram and Saahdiq Charles).

Our critics might say we looked the same as last year and that we can’t get 295 yards rushing against Bama’s D-line. But I will argue that this offense is different from last year’s in many ways. We didn’t run a stacked I-formation the whole game, advertising to BYU that we were going to run. We passed and ran the ball out of similar formations, making it difficult to predict what we were going to do. Our play action passes were actually legitimate run fakes before throwing the ball.

Furthermore, Danny Etling was 14/17 for 171 yards and each pass was as beautiful as the one before it. His only incompletions were two smart throw aways and an easy drop by a tight end. Going into the season many wanted LSU to utilize more offensive weapons in the passing game. Over a third of Etling’s passes were to non-wide receivers. Isn’t this the type of offensive performance Tiger fans have longed for over so many recent years?

LSU was not completely perfect on the night. There were a couple aspects of the game that concerned me.

All offseason Coach O preached about how we were going to be 50/50 on our run-pass ratio. We couldn’t have been farther from that. 76% of the offensive plays were running the ball. According to Danny Etling “We just took what the defense gave to us.” Although I would like to see a 50/50 ratio vs. Chattanooga this Saturday.

Red Zone offense was a struggle LSU had last year too. We remain too predictable in this aspect of our game. Just a simple five-yard Tight End pass would have worked and at least kept the defense off-balance. Next week I don’t want to see placekicker Connor Culp ever step onto the field to kick a field goal within the red zone.

Finally, our special teams were less than spectacular. Donté Jackson was supposed to return punts but due to the lack of depth at cornerback on Saturday, Coach O did not want to take a chance on injuring him. Furthermore, we let BYU get way too many yards on kickoff returns. This is most concerning because we don’t have a special teams coach and it showed. I hope Bébé has a good plan to fix this potentially weak link in our game.

All in all, Saturday night was a wonderful intro to the 2017 LSU Football season. And yes, WE ARE UNDEFEATED!