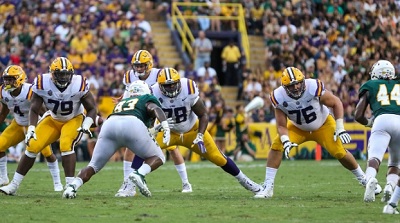 Sometimes the most frustrating games are the ones that were won but should have been won better and sometimes the best thing to do is focus on the win and fix the mistakes so a bad win won’t turn into a loss. That’s exactly what LSU will have to do in order to play their best at Auburn.

The first half was what you wanted. LSU’s dominate and opportunistic defense made a lower tier offensive line look silly with five sacks combining for a total loss of 44 yards. The secondary didn’t let up either and at the end of the half SLU had barely mustered 37 yards despite a few lasting drives. We looked like the big boys out there, how it should be. Joe Burrow passed for 148 yards and our running game was dominant again. We had some flaws in pass protection and Burrow was holding the ball too long sometimes, but you have to play the whole game.

Our stubborn defense kept us in the game with clutch play but our play calling needs to take a tremendous turn for the better to earn the respect of the nation. I hope we were just playing down to the Lions level because Auburn won’t be so nice.