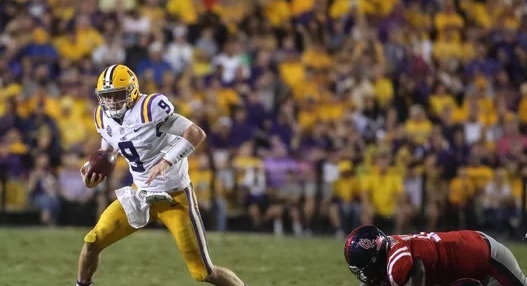 Hello Tiger fans! Once again, it was a great Saturday to be a Tiger. It was exactly what you wanted to see. A confidence-boosting offensive performance and strong consistent dominance, to open a string of tough SEC games.

Joe Burrow showed that he could be everything we’ll ever need him to be, with no compromises. He threw for nearly three-hundred yards, a mark that no LSU quarterback has surpassed since Zach Mettenberger. He also kept the defense very honest with nearly one hundred yards and a touchdown on the ground. That’s nearly four-hundred yards and 4 TDs of production by a position that LSU has suffered in for years. We need a quarterback with production like that to beat the Alabamas and Georgias and it finally looks like we have it. Did I mention his genius audibles? Yeah, those will help against Georgia too.

We pounded the ground with Clyde Edwards-Helaire, the most loveable player you’ll ever watch. He never stops, never takes no for an answer, and gets where he needs to go. Even with the absences on the O-line we managed to open up holes easily (except for Garrett Brumfield’s replacement, Donavaughn Campbell, who couldn’t get a hold on 95).

We held our own for the whole game on defense against one of the better offenses in the nation. The pressure was put on the defense and they handled it well. Jordan Ta’amu, a Heisman candidate, dead-accurate quarterback who is famous for launching passes downfield, only completed a measly 50 percent of his passes. His longest pass was a jump ball to the 6’1 feet, 230 pound star wideout, A.J. Brown for 34 yards. We put Ta’amu out of his comfort zone by putting pressure on him throughout the game, which took a toll on him. We went stride for stride with the receivers, and never a single coverage bust. We played hard, smart, and disciplined the whole game and made them make truly special plays in order to move the ball.

The LSU Tigers put it all together for a dominating performance on a stellar offense and an angry defense. A win like that on a rival is unmatchable!