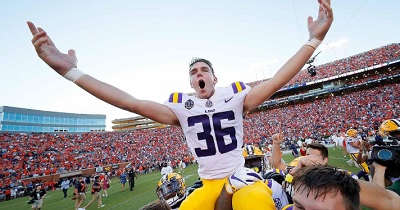 Hello LSU fans! I know a lot of you are still coming down from that adrenaline-packed victory. I say with confidence that I’ve never witnessed an LSU team like this one. All LSU’s doubters and critics are eating their words right now. LSU, for the first time in a while, has earned the unshakable respect of the nation. WE ARE FOR REAL!

Coach O’s continuously preached motto of, “start fast, play with passion” was carried out unfailingly by the Tigers last Saturday. I knew we were up to something when we capitalized on an early interception by Grant Delpit to jump to a 7-0 lead, shortly followed by two attempted Tracy field goals and a 10-0 lead.

Of course, we were the underdogs and it wouldn’t be the Tiger Bowl if it wasn’t a close, good ole’ fashion, hard fought win. Like White stated after the SLU game, “Sometimes you’re going to make mistakes but you just have to play through the whole game and that’s what fuels competition.” It’s all about the ‘W’. We played Auburn the whole game and, in the end, we pulled the upset.

Joe Burrow was clutch when we needed him most, a quality that prevented us from being a national caliber team for years. He refused to be sacked and never threw an interception for the 3rd week in a row. Throughout the game he threaded the ball through the middle consistently. He struggled on a few sideline throws which he had troubles with against Southeastern too. He had a lot of help from the receivers that are beginning to show the signs of athleticism and excellence that we knew they had.

Our running game was just consistent enough to get us yards in the right situations. If we had been stuffed there, the game would’ve been a lot harder to play.

Although, our elite defense was the real gamechanger. Our two interceptions on Stidham gave us momentum in the beginning and later a confidence boost. We sometimes got a little weak on the run game when we got tired, but a few long drives from the offense solved those problems.

I’m so proud of my tigers! They competed with a reigning SEC west champion and came out on the winning side because that’s what LSU is… A WINNER!