Hello Tiger fans! I almost feel like last week I witnessed a huge comeback game which is very strange considering it was Northwestern State and not one of our SEC West foes. The first and second half were night and day.

In the first half, Northwestern exposed our flaws. You might have called the bully prevention hotline if you heard all the names that our Secondary was called: Swiss cheese, hot butter, weak sauce, and undisciplined. A Northwestern team that was no match against our talent should not be finding every gap of our coverage. Kristian Fulton had a bad night and was often the culprit. It looked like we were running some kind of two high coverage with four down linemen and a middle linebacker pass rushing. Defensive backs lined up on every man, but playing a zone with Stingley playing man on the outside (except for when he jumped the route and left his man wide open for a TD). Our linebackers let too many routes get behind them before the safeties could get on them.

In the second half, I finally felt like we were playing with a full-throttle mentality like it was 0-0. We looked like Alabama usually does against these teams.

Our offense was perfect and Burrow got to rack up his Heisman stats while he stayed in for the third quarter and had his highest completion rate yet at 88%. We attacked their defense in its weakest spot, the middle of the field between linebackers and safeties. They were playing their safeties way back in thirds and their linebackers were up, thinking they would take away the lethal deep ball and the too consistent short throws but Burrow just hit his receivers across the middle all night. 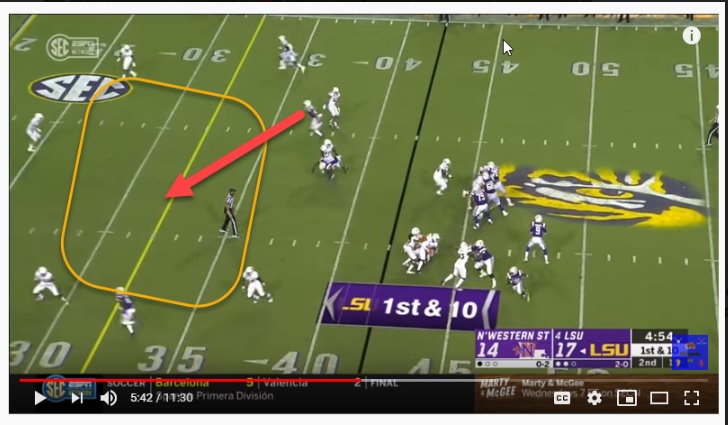 One area of the game that hasn’t been mentioned and was almost vacant from the game was running the ball. Northwestern barely bothered to try to run it into our teeth, and that’s why we were able to only play one linebacker in the box. We only ran the ball in situations where it was all we could do. This is a dangerous tendency that could allow better teams to play back and stack the box for those short yardage, high pressure situations. We are flexible in short yardage situations outside of the run game and will deploy those screen and swing passes, but it would be nice to have a run threat with all the talent at the position.

(Cheers to Trey Palmers electrifying punt return. Looks like we have helpful competition for the spot.)