Hello Tiger fans! LSU vs Vanderbilt went down as a crazy sixty minutes. 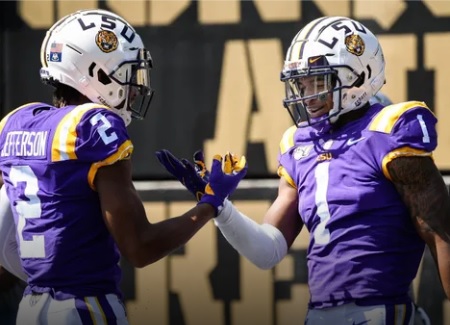 Don’t make too many assumptions about the way our year is headed based off this game. Four non-offensive touchdowns (I’m including Micah Baskerville’s onside kick return to the 1) made the score higher than you’d expect. What we’re really looking at is a 52-24 game ruled by explosive offensive plays and a mistake ridden defense.

There are four plagues that are killing our defense right now: injury, fatigue, tackling, and no pass rush. The easiest excuse to make is that our defense is exhausted from being on the field with only short breaks from our offense that averaged 1:48 per drive. Without some of the biggest leaders on our defense (especially upfront), we had more trouble filling gaps and getting to the quarterback. What we’re really missing is a Devin White to command the defense and make trouble for the opposing offense. We don’t have that player yet but somebody like Stingley or Delpit could definitely step up into that level later in the year.

On the first drive, we were dominated in the trenches and K’Shawn Vaughn ran right through us. You might not have noticed, because I didn’t, but in addition to all our absences on the defensive line, Neil Farrell and Tyler Shelvin sat out the first drive as punishment. Third stringers Justin Thomas and Joe Evans were getting blown out of the holes as Vaughn ran to daylight. Divinity also got pulled early in the game because of an injury. Our defense lacked leadership on the field. Saddest of all, Todd Harris went out with a season ending injury. Going into these two weeks, LSU’s defense is going to spend a lot of time in the rehab room and working on those new open field tackling drills Coach O promised. Next week we’ll get our pass rush back in Lawrence and Chaisson and we can draw some firm conclusions on the strength of our pass rush with our best playmakers on the line. For everyone tracking, I made a simple timetable for when to expect which players back based off the current news.

Our offense looked better than it ever has this year. Joe Burrow and J’Marr Chase had a super productive connection that broke one or two records with Burrow throwing 4 out of an all-time LSU high, six touchdowns, to J’Marr Chase and 230 out of 400 of his throwing yards to the sophomore sensation, J’Marr Chase. His 357 throwing yards in the first half were also a school record as well as his completions, touchdowns, and yards through a four game time span. Our running game showed a much called-for improvement with a new zone blocking scheme that proved more effective. We ran it only a few more times than usual but when we did we were able to spring it. This rounded and perfected attack will certainly give Alabama’s defense some trouble.

Congrats to Micah Baskerville and our best special team performance. Nearly 14 points! We’re a dangerous team on every play.