Last Look at our Utah Win 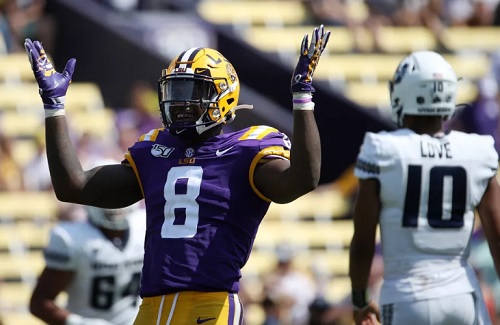 Hello Tiger fans! I couldn’t be more proud of LSU’s follow through against Utah State. We did everything we said we would and proved that we are the full championship package. I’ve never felt more ready for Florida and everything that follows!

Our defense was stout and clearly more talented than we ever thought. We saw our playmakers really shine. We shut down a usually prolific Utah State offense and held them to two field goals in the first quarter (one of which came off an interception in our red zone). Patrick Queen, Derek Stingley, Grant Delpit, and Kary Vincent were absolute monsters. They showed tremendous athleticism and made some huge plays; Stingley’s interception, Delpit’s interception, Queen’s brutal tackles behind the line of scrimmage, and Vincent’s interception and tackle for loss (where he came from far side safety all the way to the opposite sideline as the ball was snapped and made the tackle). We held them back to only 17 yards rushing and 130 yards passing. Those our numbers we’re used to seeing with LSU’s defense.

Our pass rush was felt on every down (hence three interceptions) even if it wasn’t shown in the number of sacks. Love wasn’t able to make very many throws down field. He had only two completions with two interceptions on 20+ yard throws. We controlled their short passing game by having better athletes on the perimeter. In the second half, they moved the ball for less than 50 yards. When on the field for less than a third of the game they can be absolutely dominant on every play. I’m excited to see what we can do to stop Florida.

Joe Burrow has more touchdowns than any other QB after another 5 touchdown performance. Burrow has been the best thing to come to LSU and is the greatest LSU quarterback of all time. Is it possible that he becomes our first heisman winner at the position? This is a special year for LSU. We know Burrow plays up to pressure. His competitor spirit is my favorite thing about him. I can’t wait to see what he’ll do in the coming weeks.

On offense, we showed that we can control the game with a consistent run game. Edwards-Helaire showed more of his colors getting yards after contact and eating first downs. As a result of an effective rush, we got 32 first downs (with 11 third down conversions) and had the ball for 41 minutes. We saw our backups get good reps, especially Emery and Davis-Price. The only problem for us was putting the ball on the ground three times plus an interception. Against a Florida team that has forced an astonishing 17 turnovers this season, we can’t have that impending danger.

We questioned our legitimacy in several major aspects and LSU came back and competed extraordinarily in each of those phases and looked like a very good team. I have every bit of confidence in this team going into the most important part of our schedule.