Hello Tiger fans! Keeping the “boot” for another year always feels good, especially when done in a dominant fashion as we saw this past Saturday against Arkansas. Nothing is perfect. We made errors. But all in all, we beat up a rival and that is nothing to complain about. 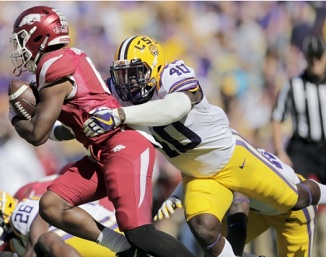 Even in the first half, when things weren’t going our way on offense, we still looked like the better team. Our backs got yards on every carry and we completed passes. In the second half, we realized that this should not be a tie game. We came out of the locker room and scored four touchdowns in two quarters.

Our receivers looked like a corps to be excited about for years to come. Height, speed and hands will be a trademark for our team next year. They finally showed the diversity and promise we have been hoping to see.

Coming into this game it was questionable if we would play Myles Brennan. It was believed that Danny Etling was not able to make those deep throws that put points on the board. Well, Danny Etling made the right throws routinely and proved that he can make big plays with his arm by completing 68 and 46-yard touchdown passes, both to D.J. Chark. Our offense started treating them like blocking dummies, propelling Guice and Williams forward for long gains. We looked like a strong team that wasn’t fazed by a loss to Alabama.

Defensively, we held them out of the game. We looked crisp. Andrez “Greedy” Williams made a stellar interception. Donte Jackson was flying all over the field making plays. Our linebackers made some hits that hurt me just from watching. On one play Dave Aranda cleverly sent Donte Jackson on a blitz from the outside. Jackson was taking the quarterbacks head off so fast I didn’t even have time to comprehend what was happening and I’m sure those 300-pound lineman didn’t know what to do against his track speed. I’m excited about the future of our defense!

Our only significant black eye on Saturday came from our PAT and field goal kicking. Connor Culp missed both his PATs and a chip-shot field goal. If we would have done that against Auburn or Florida, we would have lost. Thank goodness it didn’t negatively affect this game for us. But it did resurrect Coach O’s concern expressed earlier in the year that we “don’t have a field goal kicker.” This will need to be resolved if we are going to win out, including (hopefully) a big bowl game at the end of the season.

I like the way things are shaping up as we head into two opponents that have a combined record of 10-10, with one coach recently fired (Butch Jones at Tennessee) and one who is on the hot seat (Kevin Sumlin at A&M). I expect big wins for LSU in both contests.

We have overcome so much this season. It’s time to finish strong.