Hello Tiger fans. It’s not over! This is the first positive blog post I’ve written in three weeks. Certainly, an important win for Coach O. If we hadn’t had played this out, half of Tiger nation would be calling for Coach O’s head on a plate. This is not to be a doomed season for the Tiger faithful and the Tigers themselves.

No better way to win a classic SEC rivalry in the Swamp. Florida is a tough SEC opponent. No doubt about that. Nobody expected LSU to win coming off an embarrassing loss to Troy, but we were actually well matched with Florida. While not the toughest team on our hit list, the Gators are a worthy opponent. LSU came ready to ball and they played with passion and grit. They wanted it, and they got it!

Let’s start with the defensive side of the ball. I’ll be honest. I thought it was over for our defensive line when we were pushed and shoved around by Troy. Turns out we have a new defensive line when we are healthy and play our hearts out every down. Rashard Lawrence and Ed Alexander are difference makers. The offense helped by extending their drives and working the clock out to give our defense a rest for once. Our pass rush was there, stacking up five sacks on the day. Next week more help arrives with senior Frank Herron, who has been out for disciplinary reasons, returns to the field.

Arden Key remains underwhelming compared to last year and certainly compared to the high hopes we had for him coming into this season. He just doesn’t play with the same tenacity that he did when he led the SEC in sacks last year. Getting locked up with a lineman and waiting for the ball to come to him just seems unlike him. Occasionally, I caught a glimpse of the Arden Key I remember from 2016, firing out and powering his way to the quarterback. Every game I am hoping for him to come roaring back and making his presence felt on every down. 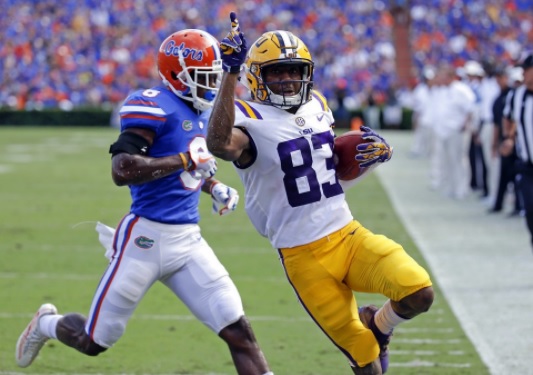 Our coverage was tight the whole game. Feleipe Franks had nowhere to throw. Devin White set the tone for our defensive backs with 13 tackles (this guy is having an All-American caliber year). It must’ve seemed like he was playing on all corners of the field for Florida Head Coach Jim McElwain and company. Props to Dave Aranda for planning the blitzes and coverages as if he could predict the future. Our linebackers failed to fill the gap a few times and let Malik Davis or Lamical Perine break into the secondary a few times. What do you expect when you’re playing true freshman all over the field? Otherwise…WOW!

On offense we improved greatly. I think we finally saw what Orgeron meant by not showing Canada’s whole hand until conference play begins. I fell in love with many of the plays. A delayed tight end screen, a quick pass to the F-back. The utilization of running backs and tight ends in the passing game was incredible. As well as the utilization of our receivers in the run game. In fact, our wide receivers had more rushing yards than our running backs and our leading receiver was Darrel Williams with three receptions. If Danny Etling made the passes he needed to make, we could have done a lot more. On one play, Etling over threw a wide-open Darrel Williams on a deep wheel route that would have been a touchdown. That kind of mistake will matter a whole lot more next week against Auburn, and would have mattered more against Florida had they not missed their extra point, giving us the 1-point advantage we needed to squeak on by.

Overall, a great win in a hostile environment. Congratulations on a job well done, LSU! The future is looking a little brighter for Tiger Nation!