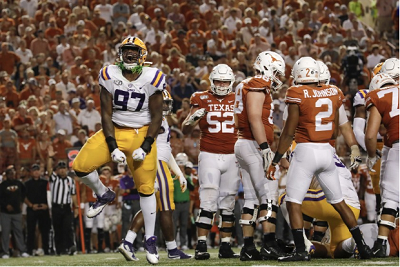 Hello Tiger fans! The Tigers put on a convincing win last Saturday that put us in the national conversation. We won the game when everything was on the line against another team that was also playing their best football. Most importantly, it was a blast to watch!

In the first half the LSU defense looked like the kind of defense that we were famous for in years past. For eight straight downs (with our defense getting almost no break in between each four) we held Texas on the goal line. By winning the trenches, meeting the ball carrier in the gap, and moving the pile back, we stopped them.

We only allowed seven points on the board. We kept Sam Ehlinger from using his legs, although we couldn’t get to him and he had too long to throw. Chaisson had one sack, but also might have been getting held several times. We cut off his lanes to run, but let him sit back and make decisions.

We played the part of DBU until Fulton undercut a route and gave up a 60 yard touchdown. Aside from that, I have huge amounts of confidence in both our corners, Fulton and Stingley, playing lockdown man coverage to the outside. Stingley was a beast. The two times he was targeted he broke up the pass by making up ground on the receiver and wrestling the ball away with one hand and nearly intercepting it on one play and coming back to the ball and knocking it down on another.

Throughout the second half, the game felt like a replay of last year’s West Virginia versus Oklahoma shootout. Our offense was rapid firing first downs, big gains, and explosive plays. The expectation of our offense was to score in about forty-five seconds. This tempo definitely got to our defense who looked fatigued in the second half. But LSU commentators pointed to a lot of factors besides the short breaks, long drives, and 93 plays on the field. Apparently, there was no air conditioning in the visitor’s locker room, not enough IVs at halftime, and scorching Texas heat. We could have dominated this game, but we have to be able to play through the third and fourth quarters with little rest, because that’s where the game is won. If we have the potential to hold them to seven points per half then they shouldn’t be getting 31 points in the second half. Orgeron has made it clear that that problem “will be fixed,” and we will be competing in the fourth quarter.

Our offense was a beauty of effectiveness in the intermediate and long passing game. Joe Burrown had plenty of time in the pocket and was able to hit targets down the field and, boy, he could fit it into every window. Burrow’s average pass was 2 yards more than against Georgia Southern at 12 yards. We still had that short passing game going, between 7-10 yards, and that’s what ate up first downs. We made 16 explosive plays; that’s a quarter of the plays that our offense ran, which also happened to be 29 plays less than what Texas ran. Our longest drive was eight plays less than their longest because of all the 25+ yard plays. We never once fell back on our rushing game. We only handed it off 18 times which is less than half as many times as we passed it. That stat has been a long time coming, but unfortunately, we’ll slow the game down a little and give it to Edwards-Helaire more if our defense has another dropoff.

Burrow for Heisman is now a reality! A statement win against Texas went a long way for LSU’s hype. Putting us in the top four and putting Burrow only behind Jalen Hurts and Tua Taigovailoa in the Heisman race. He has better reason than either of them to be there, having competed against a top ten opponent already and responding to it with 471 yards. With three stud receivers catching for 100+ yards, he can’t say he doesn’t have help, but who ever won that trophy without it. The 3rd and 17 play that clinched the game, when they blitzed everyone and Burrow stepped up and threw it running forward to Justin Jefferson for a touchdown was a “Heisman play.” With all this momentum, LSU is headed straight for a game of the century with Alabama. This is going to be a climatic season for us and we know where we’re going!