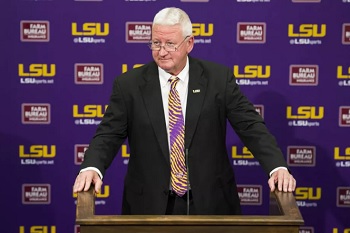 Hello Tiger fans! One of my New Year’s resolutions is to get more creative with the website. After all, there are many LSU news sources that are more frequently updated than a 13-year-old writer already behind on his homework.

I want to try different things that are more challenging and unique. For example, I might join forces with one of my more tech-savvy friends to do a film breakdown like the experts you see on TV. I’d also like to do more human-interest stories which would allow me to find some of the most historic, inspiring, or crazy LSU athletes. I want to have fun with this!

All that said, today I’m going to compare the 2017 Tigers to the 2018 Tigers to find the improvements and changes that have pulled us closer to the top of the food chain.

From ’17 to ’18, LSU acquired a new offensive coordinator, a transfer QB, and landed our strongest class of receivers since OBJ and Jarvis Landry. The most drastic improvements between these Tigers and the ’17 Tigers lie in the passing game. All last year’s offseason, Ensminger assured fans that improvements in the passing game would be emphasized. In the season, we saw Joe Burrow bring that to fruition.

Joe Burrow brought us from an average passing team to where we need to be to compete at the top of our ability. With almost a 3,000-yard passing season, LSU actually had an offense. Another thing to note about this difference is that while Etling had his best games against Chattanooga and Arkansas, Burrow undoubtedly played his best football against UCF, Georgia, and Auburn. Those were the games where we saw the strength of our passing game come alive.

As we can see LSU has made long strides in just a year to strengthen their passing game and so much credit for that goes to Orgeron and Ensminger for bringing the change we needed.

The rushing game was the one area where LSU dipped a little without a Leonard Fournette or Derrius Guice to carry them. In 2019, we will look to make some major improvements.

As you can see very clearly, LSU dropped quite a bit. The obvious thing to point to is the departure of a great tandem in Derrius Guice and Darrel Williams but below that there are a couple other big reasons. As LSU moved into a different offense and obviously a very different set of personnel, we depended less on the rush game for big game changing plays as our passing game became more explosive. Also, we relied much more on jet sweeps which spread carries to a different set of personnel. Lastly, our offensive line was very young this year which made it hard to push the ball up the middle against the big defensive lines of Alabama, Texas A&M, and Auburn.

Next year, LSU should bring back that explosive run game factor that gives our offense the gas it needs to dominate a game with freshman John Emery, Tyrion Davis, the returning Clyde Edwards-Helaire, and sophomores Chris Curry and Tae Provens. With this added benefit and another season of Joe Burrow at his best, LSU’s offensive production will be exciting. I can’t imagine what the defense will do!