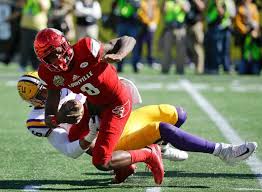 Today we’ll close out the Defining Moments series with redemption and a new leader.

After we lost to Florida, some wondered if we would be able to beat Texas A&M, because even though Texas A&M had lost a lot of games in their season they had started off as a top ranked team. LSU was obviously still mad from the Florida game because in the end we demolished A&M 54-39. Derrius Guice had the game of his life, getting 285 yards to set the school single game rushing record (the third time this season that an LSU running back had set the new record). We did a good job of controlling Myles Garret, Texas A&M’s star pass rusher. Garret only got two tackles, neither of which were sacks. We continued our streak of never losing to A&M since they joined the SEC.

During the LSU vs. Texas A&M, rumors got out that LSU had officially hired Tom Herman (Houston’s head coach) as our new head coach. Shortly after, LSU Athletic Director Joe Alleva tweeted that it wasn’t official. But the choice was clearly between Tom Herman and Ed Orgeron. I remember the coach drama was happening on a Saturday while I had my own football game. My team was playing in the third place state championship. While we were warming up I could see my dad on the sidelines making an “O” with his hands. It was rivalry weekend so I guessed the Ohio State vs. Michigan game had started and that is why he was making an “O.” But when we went to get water before going out to play both my parents came yelling and screaming that LSU hired Coach O. I like him more and more. When Coach Orgeron says “Geaux Tigers” you can tell that he has been that his entire life. This man bleeds purple and gold.

Surprisingly, after we ate up Texas A&M, we still had an appetite for Louisville. Louisville had been in the Top 3 earlier in the year and at times were expected to be in the CFP. They also had the highest scoring offense in the nation led by Heisman Trophy winner Lamar Jackson. However, if Dave Aranda has a month to plan and scheme, don’t expect too many points from the opponent, even if they are the highest scoring offense in the nation. We beat them 29-9 and I got to witness it first hand from the stands at Camping World Stadium in Orlando. I heard the cracks when Lamar Jackson was sacked all eight times, some for big losses and one for a safety. I heard the boom when Derrius Guice completely laid out Louisville’s kicker on a return. I saw the highest scoring offense in the nation not even get a touchdown and a Heisman winner get tortured. Devin White had an awesome game and he got me excited about next year. We absolutely dominated. After that game I got the first glimpse of what a whole game of a non-interim Head Coach Orgeron game looks like. Imagine a few years of that!