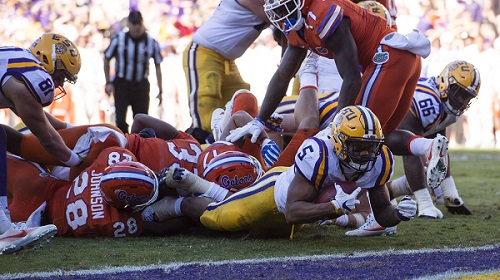 The biggest heartbreak of the season, for me at least, was the loss to Alabama. That game was circled on my calendar since the end of the 2015 season. It wasn’t a game that we were predicted to win. And even though we held our own with the number one team in the nation, it was still hard. It was 0-0 throughout three quarters. Our defense outshined Alabama’s defense in my opinion. It wasn’t even a terrible game for our offense, considering that we were up against the best defense in the nation. The final score was 10-0, because eventually we forgot to contain and Jalen Hurts took advantage, even though there was a pretty obvious block in the back in my opinion, and we threw our first and last pick of the game that set up a pretty easy field goal for Alabama. Still, against LSU’s defense Alabama had their lowest scoring game of the year. If we had a decent offense we could have won that game, but hopefully next year we will have a good offense and we will win.

Early in the game against Florida, it looked like it would be a blowout. We scored an easy touchdown early in the first quarter and it looked to become a rout. Then, each and every trip to the Red Zone, and there were about seven of them, we could not punch it into the end zone. We fumbled, went on fourth down and didn’t get it, or we muffed the snap on a field goal.

On defense, we gave up a few critical big plays. Even on special teams, we made mistakes. On an important kickoff near the end of the game, Donte Jackson ran into one of his blockers, and fumbled. Still, after all those mistakes, we were in the game as the final seconds ticked off the clock. We had our offense on the field, on the two yard line in fact, and a touchdown would win it. The final play was supposed to be a sweep to the left pylon with Derrius Guice. In a terribly disappointing manner, he ran the wrong way, ploughing into a herd of Florida defenders between the tackle and the tight end. This final mistake, and inability to get the ball across the goal line, cost us the game.

I was sickened by yet another Saturday heartbreak.