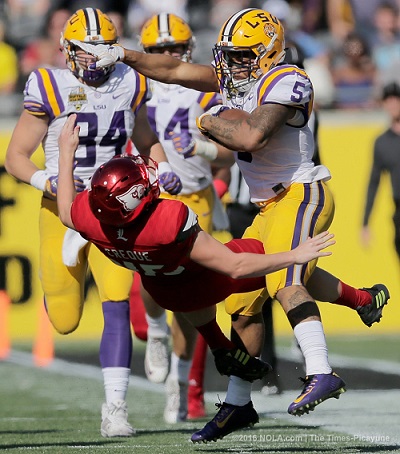 Continuing the Defining Moments series, I want to focus on numbers 6 and 7 on our list. That will bring us to LSU’s fifth game of the season against Missouri. It was the Saturday that gave Derrius Guice and Ed Orgeron their first real debut. Even though they were already a huge part of the team, they stepped up and took center stage.

Previously, I mentioned that Les Miles got fired and Ed (Bébé) Orgeron, our Cajun Defensive Line coach, came out of the background and took over as the interim Head Coach (later on of course he would lose the ‘interim’ part). LSU thought Coach Oeaux was the right man for the job because of his experience at USC as interim for most of a season and a short (rather unsuccessful) career at Ole Miss. Missouri was a great opponent for him to cut his head coaching teeth.

While not highly ranked, Missouri was still an SEC opponent that had to be taken seriously. We took them so serious, in fact, that we demolished them 42 to 7. After that game, I felt certain that Orgeron was going to capitalize on his time as Head Coach. Before the game, Orgeron completely refurnished the staff. With lightning speed, he switched Steve Ensminger from the Tight Ends Coach to the Offensive Coordinator. Pete Jenkins was asked to come back from his retirement spot in the Florida panhandle to fill the hole Orgeron left as Defensive Line Coach. The results were immediate.

The revamped coaching staff oversaw the most offensive yards versus an SEC team in LSU history on offense, while the defense only allowed eight first downs and one touchdown. It was our highest scoring game of the year and the opponent’s lowest scoring game of the year to that point. All told, it was a super-strong showing for Orgeron’s first SEC game. I don’t think it was a coincidence. Orgeron lost the ‘interim’ part of the title at the end of the regular season and went 5-2 in his portion of the season. Nobody deserved the job more.

The other not so dark horse that came in versus Missouri was Derrius Guice. I had spent the entire preseason getting hyped about Leonard Fournette. Little did I know that another running back would steal the show. Guice went for 184 exciting yards on 17 carries, one reception, and three touchdowns proving that LSU could survive even with Fournette on the sidelines. Guice isn’t a huge back, but he’s impossible to bring down. No matter what happens, he just keeps pumping his legs like a mad man. Three people could have him wrapped up but he would find a way out of it. The way he spins and turns, he reminds me of when I am trying to bait a mud minnow but it escapes my fingers. Guice got more yards than Fournette over the year and has landed a spot on the Heisman watch list for next year. If Guice didn’t show up, we would have had no backup plan for next year while Fournette goes on to the pros. But now there is plenty to dream about for next year.