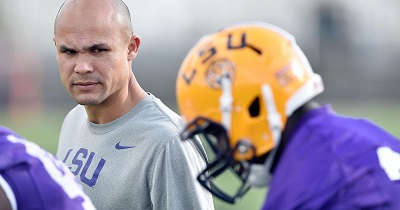 In this 2016 season a lot happened to shape LSU football. So I’ll pick eleven moments that shaped this season into what it was. Today I will reveal the first three in this series.

First off, on January 1st, 2016 Les Miles brought in Dave Aranda from Wisconsin to be LSU’s Defensive Coordinator. What a way to start the year. Immediate results came in his inaugural season, we led the nation in fewest touchdowns allowed and we finished 5th in overall Defense. Now he is considered one of the best and brightest assistant coaches in the nation. Best of all, he is staying at LSU for at least three more solid years of amazing defense. LSU has always had good defenses, but the one we had this year was exceptionally good. If this year is the standard for years to come then I think we could be building a defensive dynasty. If we could get a little offense going then the defense could do the rest because as my dad always says “defense wins championships”. My favorite thing about Aranda is that while most coaches are yelling their heads off, he just stands there like a wizard watching his magic unfold, occasionally making a motion with his hand. Never have I seen him yell. Of course, with the way our defense played all year he had nothing to yell about. His ability to know just the right thing to do to counter the next play is rare. In my opinion he is second to none when it comes to coaching in college football. The future is blazing bright.

The second thing that happened helped Aranda’s defense become what it was. Early in the year, key starters who were NFL draft eligible announced they were going to return for their senior year. This included Tre’davious White and Kendell Beckwith. Without these leaders, the 2016 season could have been a lot worse and our up and coming freshmen and sophomores wouldn’t have had leaders and mentors to take them to a higher level and make them better. I’m sure when they returned it was with the thought of finally beating Alabama or even better win an SEC or even National Championship. I’m disappointed we couldn’t live up to our potential and do both of those things. It makes me mad that these seniors who have been here for four years don’t get to say they won a title or at least beat Alabama.

The third and final for today is the loss to Wisconsin to begin the season. It really made me sad that so soon into the season we realized we didn’t look much better than last year, and already the championship dream was getting foggy. We learned that our defense could at least keep us in the game, score half our points and set up the other half. Brandon Harris came in, who I had been hyping up for a whole off season, with sufficient experience and talent to lead a dominant offense. I even though he would be one of the best quarterbacks in the SEC. Boy, were we wrong. All game Brandon Harris was just throwing it away to receivers covered by three people, until finally on the last drive he threw it to the other team to seal our fate. While it is true that “defense wins championships”, it certainly takes an offense to get you there. As we learned later on, you have to put points on the board (ie, vs Alabama) and do so within regulation (ie, vs. Auburn) if you’re going to win and keep the championship fires burning.