Losing early in the season always hurts the most. Right when my expectations are skyrocketing, the road to a championship season ends before it ever started. It also really hurts when the opposition that just crushed us was unranked and unnoticed previously AND from our conference division. But who knows? It could turn out that we got beat by this year’s national championship team. Or, at least maybe Mississippi State will give the Crimson Tide problems come November. Regardless, we played horrible. They crushed us. Like it or not, this might just be a rebuilding year for our Tigers. There it is: the cold, hard truth.

Mississippi State is an experienced team. Their average player is a junior, while LSU is starting nineteen true freshman. Against an SEC West opponent like Mississippi State, it showed that for too many of our starters and significant contributors it was only their third game out of high school. Even if they were the most talented high school players in the nation last year, it was inexperienced decision making leading to small mistakes that added up to constant yardage in the wrong direction. K’Lavon Chaisson cut inside too many times, leaving a wide open sideline run.

Our defensive line was man-handled and by the end of the game, completely gassed. The holes Mississippi State was opening could fit a Volkswagen. We dearly missed Sci Martin, Frank Herron, Ed Alexander, Neil Farrell, and Rashard Lawrence. I shutter to imagine facing Bo Scarbrough and Alabama if we play like real life blocking dummies. 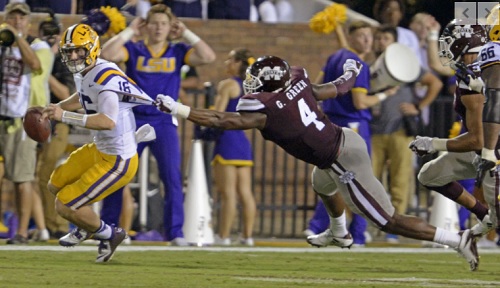 It wasn’t much better in our secondary. In fact, the main reason that the bulldogs put 37 points on the board were passes. Our defensive backs accounted for many busted coverages and many times failed to keep up with the receiver. Mississippi State quarterback Nick Fitzgerald played exceptional, there is no denying that. It would have taken a lot to limit him, but I’m still very frustrated and disappointed in our defense.

On offense if we had taken the lead early to get a boost to our confidence maybe we could have made it competitive. Once we started losing, it was hard to come back, and by the end they were just flinging up Hail-Marys. The performance of our wide receivers was maddening. Running Back Darrell Williams led the team in receiving, which shows you how much of an impact our wideouts made. Most of the time our receivers just failed to make the necessary separation. Twice, Danny Etling hit a receiver in the face only for it to hit the ground and bounce away.

I firmly believe that if not for penalties this game could have had a different outcome. It wasn’t so much the number of penalties (11 total, though a few were declined) that made it unbearable, but the significance of each one. Very early in the first quarter D.J. Chark caught a touchdown pass that made the crowd go wild, as well as me in my living room, only for it to be called back for a senseless offensive pass interference on Stephen Sullivan. Then later two of our defensive leaders were disqualified for targeting which extended drives for the Bulldogs. All of this slowly squeezed the life out of LSU. By the third quarter it was a downward spiral.

The 2017 season is not over. We still have nine more games to prove ourselves. I will stay the most optimistic LSU blogger out there, but even for me that got a little harder last Saturday.