Bounce back for the boot 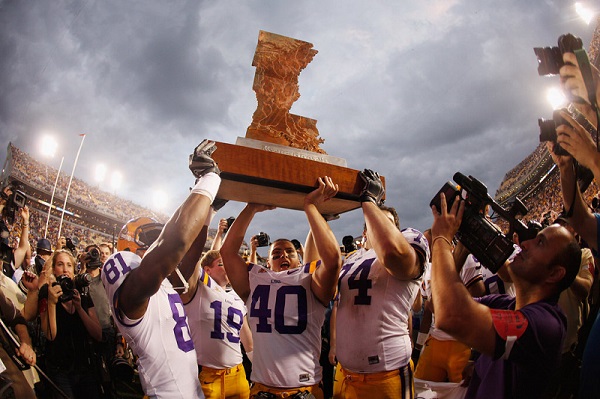 This past Saturday, LSU played Arkansas and proved that we can bounce back from a loss and have one of the best games of the season.

We started off scoring on our first drive, and we didn’t look back once. Similar to our game against Ole Miss, we dominated a game that I predicted to be a one score game. Even though we didn’t have Leonard Fournette most of the game, Derrius Guice stepped up once again and got 252 yards on 21 carries, including a 96 yard run for a school record Longest Play from Scrimmage.

Although the spotlight was again taken by the run game, Danny Etling was extremely accurate, completing 10 of 16 passes for a total of 157 yards and no interceptions. After being thrown around by Alabama, it was great to see that Etling could rebound with a great passing performance.

It was also great to see the O-Line protecting Danny Etling and making sure the running backs weren’t taken down in the backfield. The protection and overall performance by the O-Line was the biggest difference between the Alabama and Arkansas games. In all our losses we lost the battle in the trenches, because if you can’t protect the backfield how are you ever going to get points.

Our defense had another good day. Besides missing one big touchdown pass, we had one of our best Saturdays on defense (I’m starting to say that every Saturday). We had two interceptions, one by Donnie Alexander and the other by Dwayne Thomas. We also recovered a fumble in our own end zone. We brought all kinds of pressure on Austin Allen forcing 3 sacks while going 15-31. With the exception of the touchdown play, our DB’s were great and never gave up a step. Austin Allen never had a receiver to throw to because our DB’s were like wet blankets, just smothering them. All of our linebackers helped the D-line stuff the run game, or brought pressure by blitzing, or helped in covering a few guys nobody else picked up.

Arkansas was a ranked SEC west opponent that should not have been taken down as easy as that by any team. Not even Alabama played that good against them. If we can shut down the second best QB in the SEC that easily, we shouldn’t have a problem with Del Rio of Florida next week. It did feel good to see the Battle of the Boot trophy lifted by purple and gold jerseys for the first time since 2013.

Just to close out, three out of the top four teams in the nation lost. Clemson fell to Pitt, Michigan fell to Iowa, and Washington fell to USC. LSU moved up 8 spots to NO. 16 in the new AP polls. If we win out we should be able to get to the Sugar Bowl assuming Alabama beats Auburn. And I dare say that Coach Ed “Bebé” Orgeron will be LSU’s next Head Coach.