All the Reasons Why…

Trying to enjoy New Year’s Day is hard when you’re a college football fan. I was having a good time watching LSU maintain a lead just small enough to keep it exciting, while eating take out noodles, and playing air hockey at a nice hotel in the town of my birth 12 years ago, Charlottesville, Virginia.

It was all fun and games until Miles Boykin, a tall Notre Dame tight end, snagged a one-handed catch. When he used Donte’ Jackson’s momentum to his advantage (and you know that Donte’ Jackson can get some momentum) reality started crashing down. John Battle made the worst tackle in the history of college football. As Battle did that tackle/chest bump I could almost hear him saying, “Here is a chest bump for the touchdown that me and Donte’ just let you score.” I wouldn’t put all the blame on those two DBs though. Why was the 5’11 Donte’ Jackson covering the 6’5 208-pound tight end in the first place? This is all just one play, and it was only one of the reasons we lost. 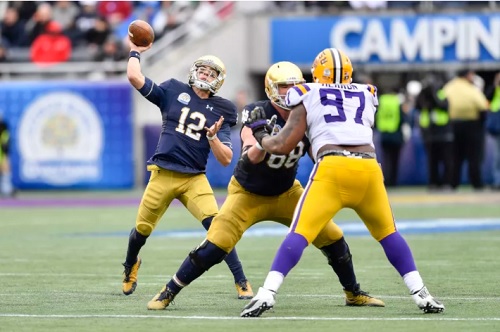 So here are some more…

Missed tackles were on steroids. Sometimes I wondered if the Notre Dame running backs were bars of soap in disguise. Linebackers were taking angles that looked uncomfortable.

Undisciplined eyes: we bit on every fake and faced with real speed we couldn’t recover in time. Next year I hope LSU’s defense remembers what happened in the Citrus Bowl when their faced with a fake-handoff or misleading body language.

Red-zone efficiency couldn’t be worse. Remember when I used to complain about taking too many field goals instead of touchdowns. Well imagine a world where you couldn’t even make a field goal when you’re on the inch line. Yes, that nightmare did come true. Part of the problem might be that Canada’s playbook was made to spread people out and it’s hard to do that near the end zone.

Our blocking was a down point. We couldn’t pick up their blitzes. I saw F-backs stare as their assignment blazed past them.

Our playbook didn’t look like it usually did. Where is the jet sweep (the one time we tried was a disaster), where is the back-shoulder pass to D.J. Chark, and where were the passes to tight ends and running backs (when we ran it we scored both times, so why only twice). Why did we pretend the middle of the field was off-limits? Did a Matt Canada who knew it would be his last game as a Tiger even coach with his full heart?

Mistakes on defense weren’t uncommon. I saw so many mismatches and unfilled gaps I couldn’t even count.

For the first time all year LSU’s defense looked tired by the end. In the beginning we were angry and immoveable but as we got into the third quarter the Irish started moving the ball on us. Ian Book was finding receivers and they ran the ball with efficiency. Their drives grew steadily longer (as our pass rush also faded into nothing) until they were going full speed 75 yards down the field on us. On their last three drives they scored each time. At the bottom of all this was a tired defense that didn’t want it bad enough.

SPECIAL TEAMS! How could it be worse? Our Field Goals were terrible from anywhere, we fumbled punts, misjudged kickoffs, and our kick-offs were garbage!

Every year I spend the off season hoping this is the year when I get to see us win a championship. It’s been a decade. To have a four-loss season again is infuriating.

I’ll remember this one all offseason. Hopefully, next year we can end this curse of three to four loss seasons. All we can do is hope that nothing so horrendous as that bowl game ever happens again!