With Alabama behind us 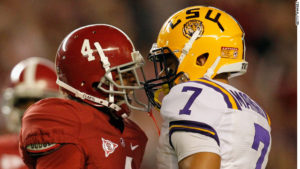 Last Saturday was a sad day for Tiger Nation, and all the people out there rooting for literally any team to take down the Alabama dynasty. On Monday morning, teachers and students who I hardly knew were coming up to me at school saying they had cheered for LSU Saturday and were disappointed that we didn’t pull off a win.

First of all, LSU put up a great fight. Considering our quarterback troubles at the beginning of the season, followed by a complete coaching changeup, we played a really strong game. There is no doubt in my mind that LSU made for the toughest competitor Alabama has played all year or will play the rest of the season. I imagine that Alabama will have an easier time getting points on the board in a national championship game than they did against LSU’s defense.

When I first started this blog, I warned my readers that if LSU lost to Alabama I would fast and mourn for several days. I was in despair that night and went on a long night walk with my dad, our usual routine after a loss. However, I didn’t feel too bad because we played great and it wasn’t a game that was thrown away by a coaching mistake (sound familiar). Overall, the most depressing part for me is that we have to wait another whole year to play them again and to have a chance at the playoff. It is also frustrating how a lot of our big talent—like Leonard Fournette, Tre’davious White, and Kendall Beckwith—will go on to the NFL after this season and none  will be able to say they ever beat Alabama.

When we lost to Wisconsin and Auburn, it was obvious that our offensive line should have played better and our quarterback wasn’t on point or Les Miles wasn’t making great calls. About this loss, there is nothing I can really say but Alabama was the better team, but only a better team by ten points. LSU played a great clean game. However, it would have had to have been a Tom Brady performance by our quarterback and our offensive line to play against that kind of defense. We did not have that offense.

Our defense held them scoreless until halfway through the fourth quarter. I was going nuts when on their first drive, we intercepted it. Dwayne Thomas had a big day making tackles in the backfield and swatting down Jalen Hurts’s passes. We were putting pressure on Jalen Hurts while containing him and we pretty much shut down their run game. You hardly heard the names of their running backs like Damien Harris all night. We were winning the turnover battle 2-0 and Jalen Hurts almost never completed a pass for ten yards. In my opinion, our defense outshined Alabama’s.

Our offensive line was the problem. I said in my last article they would be the key. Alabama’s defensive line was a stone wall for Fournette and gave Danny Etling no more than a second to get rid of the ball before he got hit. I think the anticipation of being hit had a bad effect on his throwing, and he could have been a little concussed.

I had previously said if Coach O led us to victory against Alabama, he would get a fifteen year contract. It wasn’t the wrong calls by Coach O. I think Coach O proved he should still get the job. Next year LSU will be completely restarting. Hopefully, triannual frustrating Saturdays will be over. I hope this close game brings us to the start of a new era and in five years fans will be talking about the LSU dynasty. As for this season, judging from the way we played on Saturday, I think we will dominate in our next three games. Everything seems easy after that game.