A win is a win

Going toe to toe with Syracuse at home wasn’t the way I would have drawn it up, but after a 30-point loss to Mississippi State, LSU can’t complain. A win is a win. While we didn’t sulk from our last loss in Starkville, we also didn’t hold our heads so high that we overlooked our opponent.

On Saturday, we saw that LSU fixed some problems, while others remain. Arguably the biggest problem against Mississippi State was the massive amount of penalties. Against Syracuse, however, LSU went a whole half without a penalty! By the end of the game we had only amassed three measly penalties. What a vast improvement! I can’t imagine what Coach O did to finally get through to our young Tigers. 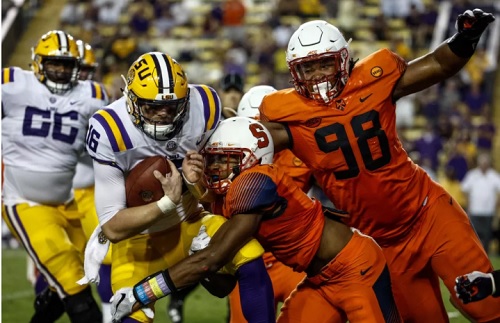 Cameron Gamble kicked it into the end zone routinely, a huge improvement from the beginning of the season. We didn’t send our field goal unit onto the field, which I’m not complaining about because I like touchdowns much better. Our punting could have been improved. Coach O noticed this and sent Jack Van Rosenberg, a walk-on redshirt freshman, into the game to take care of business.

To score 35 points, we certainly had bright moments in our offense. Overall, however, LSU’s offensive line was very inconsistent. Sometimes Danny Etling took one step back and had five orange jerseys on him, while other times he had all day to look for an open target. As has been the case with Etling, he is much better when he has time to throw. In fact, his completion percentage is normally over 60%, but under pressure he is only 29%. Much as I hate to say this, Etling’s problems throwing under pressure will mean the end of us against teams like Alabama.

One thing that could really help this problem is if Danny Etling would trust his legs more. He showed flashes of athleticism against Syracuse that makes me think there is more he can do with this part of his game. I’m not saying Etling needs to be Cam Newton, but he shouldn’t be afraid to take off and run.

Our defense played stout, holding the Orange to three points. On the first play of the game, Andraez “Greedy” Williams hopped a curl route and took it to the one-yard line. Talk about a Tiger player who has arrived! Our defense softened significantly later in the game when senior safety John Battle was injured in the third quarter (Orgeron later announced that it was nothing big and he should be back for Troy). After Battle went out, Syracuse scored three touchdowns. That showed me how much he means to this team. Freshman Eric Monroe came in and got severely picked on. Two of their three touchdowns were 20+ yard passes right over the freshman safety. We should not have allowed 24 points, but hopefully things will change when John Battle returns.

In the last article I got a comment saying that we’ll find out if Mississippi State was that good, or LSU was that bad, when the bulldogs played No.11 Georgia. Unfortunately, it proved to be the latter. Mississippi State lost 31-3 when faced with a real SEC powerhouse. We don’t have much more time to prepare for seven straight SEC opponents. But I believe this young team can pull it together, learn from their early mistakes, and let their talent shine.
Geaux Tigers!