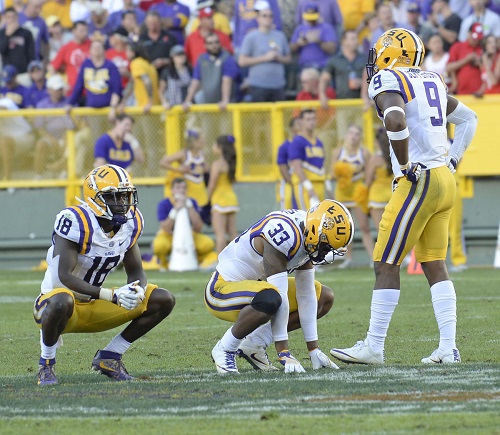 LSU’s first game against the Wisconsin Badgers was certainly exciting, but in the end LSU lost. I cried for about thirty minutes, skipped dinner, and my dad and I had to go on a long walk. LSU didn’t play horrible football. We had one great stretch – 67 seconds to be exact. But, overall, Wisconsin was a much better team than I had thought.

Our defense was amazing, holding Wisconsin to a field goal and saving a touchdown three times. If just one field goal was missed, we would have won; but Rafael Gaglianone—Wisconsin’s Brazilian born placekicker—had to go and make all three. Our defense also caused two turnovers that led to our only two touchdowns, both happening within the 67 seconds mentioned above. Earlier in the game, the defense was responsible for our first INT that stopped Wisconsin from scoring.
The reason we lost was on the offensive side. Despite Leonard Fournette getting 138 yards on 23 carries on a pretty tough defense, Wisconsin’s offense was on the field over three times the amount of LSU’s offense. Our receivers kept almost getting the reception, but then missing it and letting it hit the ground. I’m not saying they were dropping passes every time and causing three and outs. I’m saying Brandon Harris was throwing good passes to receivers that had three guys on them. The pass was often in the right spot but with three guys covering you, it makes it very difficult to catch. Brandon Harris only started throwing to open receivers on our last drive which by no surprise was our best and most critical drive. At that point, I could smell Tiger victory. However, under pressure, Brandon Harris threw it right to the Wisconsin defender.

The loss against Wisconsin does not destroy our National Championship hopes, but we can’t afford to lose a single other game. If we can just play four quarters like we played for those 67 seconds, we will be fine!

Before I close this article, I want to talk about Heisman hopeful Nick Chubb. As running back for the Georgia Bulldogs, Chubb may give Leonard Fournette a run for his money. Nick Chubb got 222 yards on 32 carries against North Carolina. North Carolina’s defense isn’t the best, but it was still an impressive game.

The other thing I want to talk about is how LSU is not the only ranked team to suffer an upset this past weekend. Oklahoma lost to Houston. Texas beat Notre Dame. I stayed up until midnight with my dad and grandfather watching that double-overtime game. Tennessee had to go to overtime with Appalachian State. Mississippi State lost to South Alabama, Auburn lost to Clemson and Ole Miss lost to Florida State. With all this commotion, LSU shouldn’t be criticized too much!
I’m ready for this Saturday!