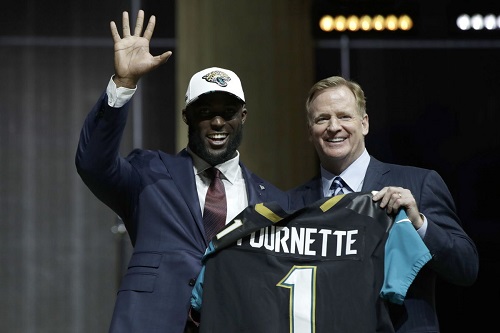 Before we start talking about the spring game and getting in to other stuff, we’re going to recap the draft. This year’s draft was significant for LSU. Eight players from LSU were drafted, headlined of course by the #4 pick in the entire draft, Leonard Fournette. The Jacksonville Jaguars selected Fournette very high for a running back and much higher than many people expected him to go, including me. Going that high comes at a cost since the worst teams get the early picks and indeed the Jaguars have only the 22nd best offensive line in the NFL. Fortunately for Fournette, the Jaguars picked up Cam Robinson in the second round; the Alabama tackle is one the best offensive lineman in this year’s draft class.

Jamal Adams was the next LSU player to be drafted and he went at No. 6 to the New York Jets. We don’t need to look any further than fellow LSU veteran safety Tyrann Mathieu to see what Jamal Adams will be like in the NFL. They have the same swagger and they both have a nose for the ball. They both have tremendous speed and stop at nothing to make the tackle, force a fumble, or intercept a pass.

Tre’Davious White was the third LSU player to be drafted in the first round when he went at #27 to the Buffalo Bills. As I can see Jamal Adams future through Tyrann Mathieu, I can visualize Tre’Davious White’s future by looking at LSU veteran cornerback Patrick Peterson. They both have the speed to keep up with fast receivers and enough height and hops to stay up there with the tall receivers. The both have a knack for the ball and never let any wide receiver get more than two feet away from them.

In the 2nd and 3rd rounds, Ethan Pocic went to the Seattle Seahawks, Duke Riley went to the Atlanta Falcons (where he will join fellow LSU veterans Jalen Collins and Deion Jones), and Kendell Beckwith went to the Tampa Bay Buccaneers (where he too will join an LSU alumnus, linebacker Kwon Alexander).

In the final rounds, Malachi Dupré went to the Green Bay Packers and Davon Godchaux went to the Pittsburgh Steelers. Dupré will enjoy catching passes from Aaron Rodgers, one of the best quarterbacks in the NFL.

Many other big names from many other teams were drafted but we’ll have to wait until the season to see who will rise and who will fall and which teams made out and which teams didn’t. This draft in particular was unpredictable, there were some picks that I wasn’t sure about and others that I thought were great choices. The funnest part of the draft is to see the players you cheered for while they were in college go to the next level and excel. Now I get to watch 51 LSU players play for different teams in the NFL.