Hello Tiger Fans! The days are passing by too fast. With only a month until football season I’ll try to say everything I want before that September 2nd day which is marked on my calendar with so many red circles, checks, and crosses that it’s unrecognizable as more than a red blob in the top left corner. I’ll continue with an analyzation of opponents eight and ten on LSU’s tougher than usual schedule. I skipped game nine because that is the revered Alabama vs. LSU matchup that will stand alone in its own post next week. 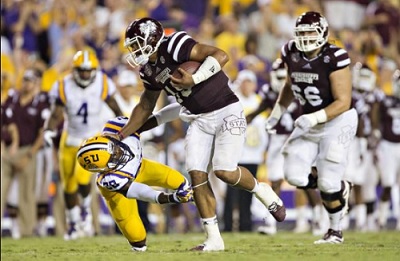 Good news. These LSU players don’t need a cheer or a video to hype them up. Tiger Fans will have no fear of sub-par effort, heart, and viciousness on October 20th. With Dan Mullen gone we can expect things to be a little choppy early in the season for Missisissippi State while Joe Moorhead, a former offensive coordinator for Penn State, gets used to the cowbells.

It’s hard to say if the program will be better off with Moorhead. Mullen was a great coach but couldn’t make it click in SEC play for a whole season. Last year they had bright moments against LSU (sorry for bringing back those memories) and a very, very close game against Alabama, but then they also performed very poorly against Georgia and Auburn. That could be a close parallel to this coming season for the Bulldogs. I don’t expect a team coming off a dramatic head coach shake up to be consistent enough to win the west but Moorhead has the ability to create bright moments just like Mullen. And watch out for Nick Fitzgerald, who is planning to unleash his arm on the entire west.

Once again, the storyline for this analyzation wraps around the new head coach. Of the six head coaching changes in the SEC, five of them are marked on LSU’s schedule.

This time the name to get used to is Chad Morris, a former SMU coach who plans to bring a spread offense. Although, running the spread won’t be successful without an obvious field commander and provided the fact that they still haven’t named a starting quarterback, I don’t know how seriously to take Coach Morris’ ambitions.
The past two seasons have been the worst in school history on the defensive side of things. Some optimistic Arkansas fans (who am I to judge) might say that there is talent on the team that just hasn’t been developed and under new defensive coordinator John Chavis things will be immediately different. And yes, that’s John Chavis, the defensive coordinator who coached at LSU for six years. This will be an interesting reunion of old friends. Let’s show Mr. Chavis what he left behind.