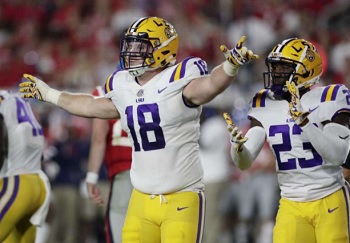 Hello Tiger fans! Bad news, it’s the last regular season game for our Tigers. Honestly, I couldn’t be sadder. It seems that every year it’s gone before you know it and then there is that intolerable waiting for months and months. The only thing that could disappoint me more is if we ended the season on a memory that we all want to forget. To wait for eight months and only bad memories to torture you. That is the worst punishment I could ever ask for.

I don’t think this will be easy. LSU has had two fairly easy outings but I hope they haven’t let that drop their guard. Texas A&M may not have had a season to be remembered but they haven’t embarrassed themselves. They held their own as much as LSU did against Alabama (final score: 19-27). That shows us that with a few big plays going their way, a tough SEC west team like Texas A&M can go toe to toe with any team in the nation. Both of us have lost to Alabama and Mississippi State, and if Connor Culp hadn’t nailed those field goals against Auburn we would have shared three losses with A&M. Both of us had an embarrassing, non-conference loss in the beginning of the season. All in all, don’t look down on these Aggies.

Texas A&M has a strong offense with playmakers all over the field. Christian Kirk gave LSU problems last year and I hope Dave Aranda has found a way to contain him this year. Traevyon Williams is your average SEC west running back. Talented, but not quite a superstar. LSU can shut them out if they have an A-day. Their intermediate and short game won’t be a problem for us and if we keep the ball away from Kirk or keep him contained at all times we can have a blowout, guaranteed. In fact, I think we can have them in desperation mode by halftime if we create a few turnovers and a number of sacks to get into quarterback Nick Starkel’s head.

Texas A&M’s defense is solid and can shut down a mediocre offense. They held Alabama to only 27 points which is about the same as LSU. LSU hasn’t been the most explosive on offense but if we run the ball like we did last week and the week before we can get enough points on the board to stay in the game.

We can’t hand a team like Texas A&M a blowout unless we have some success in the passing game, especially on third downs. While our triple-threat running game is as strong as any team’s it will only work so many times. You need the threat of long passes. I think this could go one of two ways. Texas A&M can hold us to 14-21 points because we run the jet sweeps, off-tackle runs, and quarterback keepers good but can’t find the open receiver and make a nice pass and catch for a first down. We can hand Texas A&M a big “L” to end the season by connecting on deep passes, taking advantage of their coverage to find open receivers and get first downs to maintain drives.

Tonight, you will find me in front of my t.v. shouting, “Hot Boudin, Cold Cous Cous, C’mon Tigers Push, Push, Push!” I want to end this season strong. I’m hoping these Tigers give me and the rest of their faithful fans a great memory to help get us through the off-season!