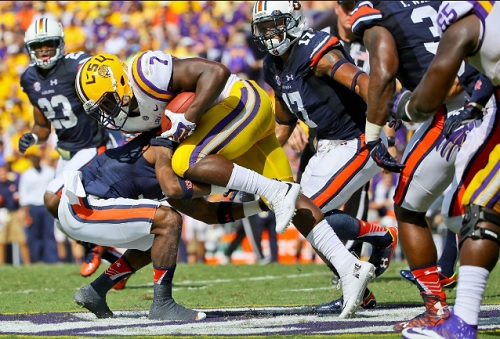 Today we’ll talk about games 7 and 8. We’ve officially entered the second half of the season, which naturally is much harder. We play five SEC West opponents. We begin to play our most bitter rivals. If we lose any games they would be here, so we have to play lights out.

We lost to Auburn last year in the closest game of the season. If we had 0.1 more seconds to get the snap off, we would have won. Last year Auburn had a pretty nasty defense but they’ve lost three DBs and four defensive lineman to the NFL so they aren’t the same team. Who knows if that will be a good change or a bad change. Auburn still has Jarret Stidham, the second best QB in the SEC after Jalen Hurts. He is a dual threat transfer from Baylor that could make things click for Auburn. They also have one of the top five running backs in the SEC in Kamryn Pettway to hold the rushing game together. They got a couple heavily recruited offensive lineman to protect the backfield in this year’s signing class. All in all, this year Auburn’s offense might be our main problem. On signing day in their top ten class, they did pick up a quite a few defensive players that could keep their defense scary. In my opinion Auburn could have a breakout year. Even though they lost a lot of defense, to the NFL some teams have a way of keeping their defense solid no matter how much they lose to the draft. Last year they beat Arkansas by 53 points. I know they can get things to click. We have got to play hard if we’re going to beat them. If our defense can stop their offense from going crazy like they did vs. Arkansas, and our offense manages to put a good bit of points on the board, we can win, but it will be close!

Last year we had no problem with Ole Miss. Leonard Fournette went crazy on their defense and got 285 yards on 16 carries to set a school record (later to be broken). Their pass offense was one of the best in the SEC, but LSU had the best pass defense in the SEC. Their defense was not great and they really had no rushing attack. Once we beat their pass offense with our pass defense, the game was over. They lost their leader of their pass offense, QB Chad Kelly, and three other of their receivers that held up their pass offense. You can never really judge a team by what they were and who they lost. The thing that decides how good they are in what areas are the new stars that emerge every year and who knows if Ole Miss’s next QB will be even better than Chad Kelly. Ole Miss played it smart on signing day and mainly picked up receivers, QBs, and defense. That’s exactly what they needed most. We’ll never know if next year their greatest superstar since Archie Manning will come. After Alabama, Ole Miss is LSU’s most hated rival. For most fans this is one of the biggest games of the season.
Geaux Tigers!!!